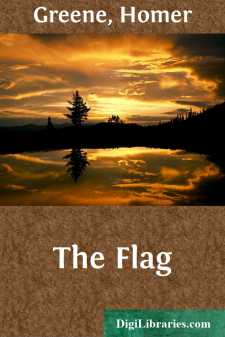 THE FLAG CHAPTER I

Snow everywhere; freshly fallen, white and beautiful. It lay unsullied on the village roofs, and, trampled but not yet soiled, in the village streets. The spruce trees on the lawn at Bannerhall were weighted with it, and on the lawn itself it rested, like an ermine blanket, soft and satisfying. Down the steps of the porch that stretched across the front of the mansion, a boy ran, whistling, to the street.

He was slender and wiry, agile and sure-footed. He had barely reached the gate when the front door of the square, stately old brick house was opened and a woman came out on the porch and called to him.

"Yes, Aunt Millicent." He turned to listen to her.

"Pen, don't forget that your grandfather's going to New York on the five-ten train, and that you are to be at the station to see him off."

"And then come straight home."

"Straight as a string, Aunt Milly."

He passed through the gate, and down the street toward the center of the village. It was the noon recess and he was on his way back to school where he must report at one-fifteen sharp. He had an abundance of time, however, and he stopped in front of the post-office to talk with another boy about the coasting on Drake's Hill. It was while he was standing there that some one called to him from the street. Seated in an old-fashioned cutter drawn by an old gray horse were an old man and a young woman. The woman's face flushed and brightened, and her eyes shone with gladness, as Pen leaped from the sidewalk and ran toward her.

She bent over and kissed him and patted his cheek before she replied,

"Yes, dearie. Grandpa had to come to town; and it's so beautiful after the snow that I begged to come along."

Then the old man, round-faced and rosy, with a fringe of gray whiskers under his chin, and a green and red comforter about his neck, reached out a mittened hand and shook hands with Pen.

"Couldn't keep her to hum," he said, "when she seen me hitchin' up old Charlie."

He laughed good-naturedly and tucked the buffalo-robe in under him.

"Jest about as usual," was the reply. "When you comin' out to see us?"

"You were going to school, weren't you? We won't keep you. Give my love to Aunt Millicent; and come soon to see us."

She kissed him again; the old man clicked to his horse, and succeeded, after some effort, in starting him, and Pen returned to the sidewalk and resumed his journey toward school.

It was noticeable that no one had spoken of Colonel Butler, the grandfather with whom Pen lived at Bannerhall on the main street of Chestnut Hill. There was a reason for that. Colonel Butler was Pen's paternal grandfather; and Colonel Butler's son had married contrary to his father's wish. When, a few years later, the son died, leaving a widow and an only child, Penfield, the colonel had so far relented as to offer a home to his grandson, and to provide an annuity for the widow....