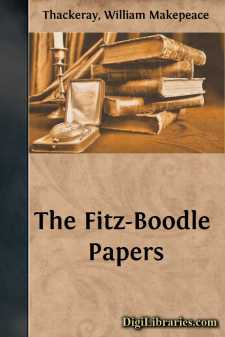 CHAPTER I. THE ALBUM—THE MEDITERRANEAN HEATH.

Travelling some little time back in a wild part of Connemara, where I had been for fishing and seal-shooting, I had the good luck to get admission to the chateau of a hospitable Irish gentleman, and to procure some news of my once dear Ottilia.

Yes, of no other than Ottilia v. Schlippenschlopp, the Muse of Kalbsbraten-Pumpernickel, the friendly little town far away in Sachsenland,—where old Speck built the town pump, where Klingenspohr was slashed across the nose,—where Dorothea rolled over and over in that horrible waltz with Fitz-Boo—Psha!—away with the recollection; but wasn't it strange to get news of Ottilia in the wildest corner of Ireland, where I never should have thought to hear her gentle name? Walking on that very Urrisbeg Mountain under whose shadow I heard Ottilia's name, Mackay, the learned author of the "Flora Patlandica," discovered the Mediterranean heath,—such a flower as I have often plucked on the sides of Vesuvius, and as Proserpine, no doubt, amused herself in gathering as she strayed in the fields of Enna. Here it is—the self-same flower, peering out at the Atlantic from Roundstone Bay; here, too, in this wild lonely place, nestles the fragrant memory of my Ottilia!

In a word, after a day on Ballylynch Lake (where, with a brown fly and a single hair, I killed fourteen salmon, the smallest twenty-nine pounds weight, the largest somewhere about five stone ten), my young friend Blake Bodkin Lynch Browne (a fine lad who has made his continental tour) and I adjourned, after dinner, to the young gentleman's private room, for the purpose of smoking a certain cigar; which is never more pleasant than after a hard day's sport, or a day spent in-doors, or after a good dinner, or a bad one, or at night when you are tired, or in the morning when you are fresh, or of a cold winter's day, or of a scorching summer's afternoon, or at any other moment you choose to fix upon.

What should I see in Blake's room but a rack of pipes, such as are to be found in almost all the bachelors' rooms in Germany, and amongst them was a porcelain pipe-head bearing the image of the Kalbsbraten pump! There it was: the old spout, the old familiar allegory of Mars, Bacchus, Apollo virorum, and the rest, that I had so often looked at from Hofarchitect Speck's window, as I sat there, by the side of Dorothea. The old gentleman had given me one of these very pipes; for he had hundreds of them painted, wherewith he used to gratify almost every stranger who came into his native town.

Any old place with which I have once been familiar (as, perhaps, I have before stated in these "Confessions"—but never mind that) is in some sort dear to me: and were I Lord Shootingcastle or Colonel Popland, I think after a residence of six months there I should love the Fleet Prison. As I saw the old familiar pipe, I took it down, and crammed it with Cavendish tobacco, and lay down on a sofa, and puffed away for an hour wellnigh, thinking of old, old times....