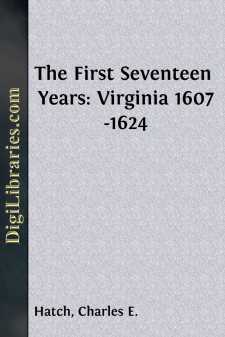 The colonization of Virginia was a mammoth undertaking even though launched by a daring and courageous people in an expanding age. The meager knowledge already accumulated was at hand to draw on and England was not without preparation to push for "its place in the sun." There was a growing navy, there was trained leadership, there was capital, there was organization and there were men ready to make the gamble for themselves and to the glory of God and for their country.

It remained for the Virginia Company of London, under its charter of April 10, 1606, to found the first permanent English settlement in America. This company, a commercial organization from its inception, assumed a national character, since its purpose was to "deduce" a "colony." It was instrumental, under its charter provisions, in guaranteeing to the settlers in the New World the rights, freedoms, and privileges enjoyed by Englishmen at home as well as the enjoyment of their customary manner of living which they adapted to their new environment with the passage of years. Quite naturally the settlers brought with them their church and reverence for God, maintained trial by jury and their rights as free men, and soon were developing representative government at Jamestown.

The immediate and long-range reasons for the settlement were many and, perhaps, thoroughly mixed. Profit and exploitation of the country were expected, for, after all, this was a business enterprise. A permanent settlement was the objective. Support, financial and popular, came from a cross section of English life. It seems obvious from accounts and papers of the period that it was generally thought that Virginia was being settled for the glory of God, for the honor of the King, for the welfare of England, and for the advancement of the Company and its individual members.

In England, and in Virginia, they expected and did carry the word of God to the natives, although not with the same verve as the Spanish. They expected to develop natural resources, to free the mother country from dependence on European states, to strengthen their navy, and to increase national wealth and power. They expected to be a thorn in the side of the Spanish Empire; in fact, they hoped one day to challenge and overshadow that empire. They sought to find the answer to what seemed to be unemployment at home. They sought many things not the least of them being gold, silver, land and personal advancement. As the men stepped ashore on Jamestown Island, perhaps each had a slightly different view of why he was there, yet some one or a combination of these motives was probably the reason.

The first section of this account is an adaptation, by the author of the booklet, Jamestown, Virginia: The Town Site and Its Story (National Park Service, Historical Handbook Series, No. 2) published by the Government Printing Office, Washington, D. C., 1949.

Portrait from John Smith's General History (London, 1624). Courtesy of the Tracy W. McGregor Library, University ofVirginia. "James Fort" built in May and June, 1607—A painting by Sidney King for Colonial National Historical Park. The Arrival of the Settlers at Jamestown on May 13, 1607. English Merchantmen of the size and date of the Godspeed 40 tons, Susan Constant 100 tons, and the "pinnessee" Discovery 20 tons maneuvering for anchorage off Jamestown Island 1607. A pencil Study by Griffith Bailey Coale, courtesy of Mariners Museum. Worship at Cape Henry on April 29, 1607 as depicted by Stephen Reid....
Show more
Show less