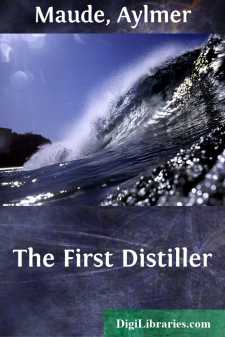 PEASANT [ploughing. Looks up] It's noon. Time to unharness. Gee up, get along! Fagged out? Poor old beast! One more turn and back again, that will be the last furrow, and then dinner. It was a good idea to bring that chunk of bread with me. I'll not go home, but sit down by the well and have a bite and a rest, and Peggy can graze awhile. Then, with God's help, to work again, and the ploughing will be done in good time.

Enter Imp; hides behind a bush.

IMP. See what a good fellow he is! Keeps calling on God. Wait a bit, friend,—you'll be calling on the Devil before long! I'll just take away his chunk. He'll miss it before long, and will begin to hunt for it. He'll be hungry, and then he'll swear and call on the Devil.

Takes the chunk of bread and sits down behind the bush watching to see what the Peasant will do.

PEASANT [unharnesses the horse] With God's blessing! [Lets the horse loose, and goes towards the place where his coat is lying] I'm awfully hungry. The wife cut a big chunk, but see if I don't eat it all. [Coming up to the coat] Gone! I must have put it under the coat. [Lifting the coat] No, it's not here either! What has happened? [Shakes the coat].

PEASANT [moves the plough and shakes his coat again] This is strange! Very strange! No one was here, yet the chunk is gone! If the birds had been at it there would be some crumbs left, but there's not a single crumb! No one has been here, and yet some one has taken it!

IMP [rises and looks out] Now he'll call on the Devil.

PEASANT. Well, it seems there's no help for it! Never mind, I shan't starve to death. If some one has taken it, he's taken it; let him eat it, and may it do him good.

IMP [spits] Oh, the damned peasant! Instead of swearing properly, he only says, “May it do him good.” What can one do with such a fellow?

Peasant lies down to rest, makes the sign of the cross, yawns, and falls asleep.

IMP [comes out from behind the bush] It's all very well for the boss to talk. The boss keeps on saying, “You don't bring enough peasants to Hell! See what a lot of tradesmen, gentlefolk, and all sorts of people flock in every day, and how few peasants!” Now, how's one to get round this one? There's no way of getting hold of him. Haven't I stolen his last crust? What can I do better than that? And yet he didn't swear. I'm at my wits' end what to do! Well, I must go and report!

Disappears into the ground.

Hell. The Chief of the Devils sits in the highest place. The Devil's Secretary sits lower down, at a table with writing materials. Sentinels stand at each side. To the right are five Imps of different kinds. To the left, by the door, the Doorkeeper. A dandified Imp stands before the Chief.

THE DANDY IMP. The whole of my booty for the three years has been 220,005 men. They're all in my power now.

THE CHIEF. All right. Thank you. Pass on.

The Dandy Imp goes to the right.