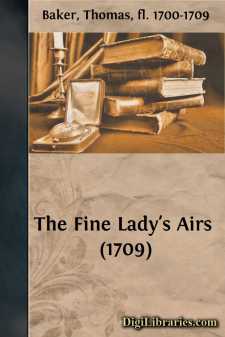 In the first decade of the eighteenth century, with comedy in train to be altered out of recognition to please the reformers and the ladies, one of the two talented writers who attempted to keep the comic muse alive in something like her "Restoration" form was Thomas Baker.[1] Of Baker's four plays which reached the stage, none has been reprinted since the eighteenth century and three exist only as originally published. Of these three the best is The Fine Lady's Airs; hence its selection for the Reprints.

Baker's career in the theatre was as successful as should have been expected by any young man who after his first play attempted to swim against rather than with the current of taste. His first effort, entitled The Humour of the Age, was produced at D.L. c. February 1701, and published March 22,[2] the author having then but reached his "Twenty First Year" (Dedication). It must have been well received, for Baker speaks of "the extraordinary Reception this Rough Draught met with." Indeed, it has in it, despite some "satire," a number of motifs which would recommend it to the audience. Railton, the antimatrimonialist and libertine of the piece, is given the wittiest lines, but his attempt to seduce Tremilia, a grave Quaker-clad beauty, is frowned on by everyone, including the author; and when the rake attempts to force the lady, Freeman, a man of sense, intervenes with sword drawn and gives him a stern lecture. In the end, when Tremilia, giving her hand to Freeman, turns out to be an heiress who had assumed the Quaker garb to make sure of getting a disinterested husband, the error of Railton's ways becomes apparent. At the same time his cast mistress, whom he had succeeded in marrying off to a ridiculous old Justice, is impressed by Tremilia's "great Example." "How conspicuous a thing is Virtue!" says she, in an aside; and she resolves to make the Justice a model wife. Despite much wit the play is thus, in its main drift, exemplary.

Baker followed with Tunbridge-Walks: Or, The Yeoman of Kent, D.L. Jan. 1703, a play good enough to pass into the repertory and to be revived many times in the course of the century. The variety of company and the holiday atmosphere of the English watering-place had inspired good comedies of intrigue, manners, and character eccentricities before this date (e.g. Shadwell's Epsom Wells and Rawlins' Tunbridge-Wells). Baker decorates his scene with such "humours" as Maiden, "a Nice Fellow that values himself upon all Effeminacies;" Squib, a bogus captain; Mrs. Goodfellow, "a Lady that loves her Bottle;" her niece Penelope, "an Heroic Trapes;" and Woodcock, the Yeoman, a rich, sharp, forthright, crusty old fellow with a pretty daughter, Belinda, whom he is determined never to marry but to a substantial farmer of her own class: her suitor, a clever ne'er-do-well named Reynard, of course tricks the old gentleman by an intrigue and a disguise. It is Reynard's sister Hillaria, however, "a Railing, Mimicking Lady" with no money and no admitted scruples, but enough beauty and wit to match when and with whom she chooses, who dominates the play; and though Loveworth, whom she finally permits to win her, is rather substantial than gay, she is gay enough for them both....