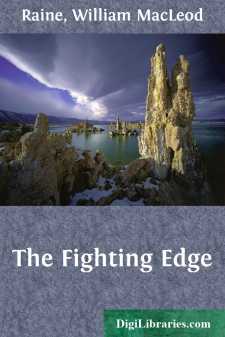 She stood in the doorway, a patched and ragged Cinderella of the desert. Upon her slim, ill-poised figure the descending sun slanted a shaft of glory. It caught in a spotlight the cheap, dingy gown, the coarse stockings through the holes of which white flesh peeped, the heavy, broken brogans that disfigured the feet. It beat upon a small head with a mass of black, wild-flying hair, on red lips curved with discontent, into dark eyes passionate and resentful at what fate had made of her young life. A silent, sullen lass, one might have guessed, and the judgment would have been true as most first impressions.

The girl watched her father drive half a dozen dogies into the mountain corral perched precariously on the hillside. Soon now it would be dusk. She went back into the cabin and began to prepare supper.

In the rickety stove she made a fire of cottonwood. There was a business-like efficiency in the way she peeled potatoes, prepared the venison for the frying-pan, and mixed the biscuit dough.

June Tolliver and her father lived alone on Piceance Creek. Their nearest neighbor was a trapper on Eighteen-Mile Hill. From one month’s end to another she did not see a woman. The still repression in the girl’s face was due not wholly to loneliness. She lived on the edge of a secret she intuitively felt was shameful. It colored her thoughts and feelings, set her apart from the rest of the world. Her physical reactions were dominated by it. Yet what this secret was she could only guess at.

A knock sounded on the door.

June brushed back a rebellious lock of hair from her eyes with the wrist above a flour-whitened hand. “Come in.”

A big dark man stood on the threshold. His glance swept the girl, searched the room, and came back to her.

The man closed the door. June dragged a chair from a corner and returned to her cooking.

From his seat the man watched her. His regard was disturbing. It had a quality of insistence. His eyes were cold yet devouring. They were possessive, not clear but opaque. They did not look at her as other eyes did. She felt the blood burning in her cheeks.

Presently, as she passed from the table to the stove to look at the sputtering venison, she flashed a resentful glance at him. It did not touch his effrontery.

“You’ve grown. Knew you when you was learnin’ to crawl.”

“In Brown’s Park?” The words were out before she could stop them.

“You done said it.” He smiled, not pleasantly, she thought. “I’m a real old friend of yore father.”

Curiosity touched with apprehension began to stir in her. For those early years she had only memory to rely upon. Tolliver never referred to them. On that subject the barriers were up between the two. Fugitive flashes of that first home came back to June. She remembered a sweet, dark-eyed woman nuzzling her little body with kisses after the bath, an hour when that mother wept as though her heart would break and she had put little baby arms in tight embrace round her neck by way of comfort....