The Fifth Form at Saint Dominic's A School Story 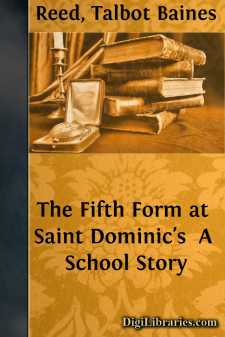 The Fifth Form at Saint Dominic’s is a story of public-school life, and was written for the Boy’s Own Paper, in the Fourth Volume of which it appeared. The numbers containing it are now either entirely out of print or difficult to obtain; and many and urgent have been the requests—from boys themselves, as well as from parents, head masters, and others—for its re-issue as a book.

Of the story itself little need be said. It deals in a bright and vigorous style with the kaleidoscopic, throbbing life of a great public school—that world in miniature which, in its daily opportunities and temptations, ambitions and failures, has so often afforded superabundant material for narratives powerful to enchain the attention and sway the emotions, whether to smiles or tears. This will take its place, amongst the best of them.

Though the story is one of school life, its interest is by no means limited to school or college walls. Boys of all sorts and conditions—ay, and their parents too—will follow its fortunes with unflagging zest from the first page to the last; and it is difficult to conceive of any reader, be he young or old, who would not be the better for its vivid portraiture and bracing atmosphere. There is a breeziness about it calculated to stir the better life in the most sluggish; and without pretence or affectation it rings out its warnings, no less than its notes of cheer, clear and rousing as trumpet blasts.

“Do right, and thou hast nought to fear,    Right hath a power that makes thee strong;The night is dark, but light is near,    The grief is short, the joy is long.”

Without the most distant approach to that fatal kind of sermonising which all but inevitably repels those whom it is meant to benefit, the story forcefully illustrates how rapidly they may sink who once tamper, for seeming present advantage, with truth, and how surely, sooner or later, a noble character comes to vindication and honour; and in all such respects it is eminently true to life. These boys of Saint Dominic’s, even the best of them, are very human—neither angels nor monstrosities, but, for the most part, ardent, impulsive, out-and-out, work-a-day lads; with the faults and failings of inexperience and impetuosity, no doubt, but also with that moral grit and downright honesty of purpose that are still, we believe, the distinguishing mark of the true British public-school boy. Hence one is impelled to take from the outset a most genuine interest in them and their affairs, and to feel quite as though one had known many of them personally for years, and been distinctly the better, too, for that knowledge. Such boys stand at the antipodes alike of the unreal abstractions of an effeminate sentimentalism—the paragons who prate platitudes and die young—and of the morbid specimens of youthful infamy only too frequently paraded by the equally unreal sensationalism of to-day to meet the cravings of a vitiated taste.

The Fifth Form at Saint Dominic’s is the kind of book we should place with confidence in the hands of our own boys when leaving the home shelter, whether for school or the sterner after-battle; and we cannot conceive of the parent who, having read it with care and pleasure, as we have done, and knowing at the same time anything of the stress and strain of daily life, would not, with gratitude to the author, gladly do the same....