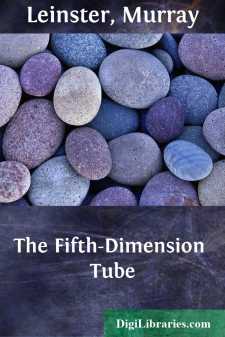 The generator rumbled and roared, building up to its maximum speed. The whole laboratory quivered from its vibration. The dynamo hummed and whined and the night silence outside seemed to make the noises within more deafening. Tommy Reames ran his eyes again over the power-leads to the monstrous, misshapen coils. Professor Denham bent over one of them, straightened, and nodded. Tommy Reames nodded to Evelyn, and she threw the heavy multiple-pole switch.

There was a flash of jumping current. The masses of metal on the floor seemed to leap into ungainly life. The whine of the dynamo rose to a scream and its brushes streaked blue flame. The metal things on the floor flicked together and were a tube, three feet and more in diameter. That tube writhed and twisted. It began to form itself into an awkward and seemingly impossible shape, while metal surfaces sliding on each other produced screams that cut through the din of the motor and dynamo. The writhing tube strained and wriggled. Then there was a queer, inaudible snap and something gave. A part of the tube quivered into nothingness. Another part hurt the eyes that looked upon it.

And then there was the smell of burned insulation and a wire was arcing somewhere, while thick rubbery smoke arose. A fuse blew out with a thunderous report, and Tommy Reames leaped to the suddenly racing motor-generator. The motor died amid gasps and rumblings. And Tommy Reames looked anxiously at the Fifth-Dimension Tube.

It was important, that Tube. Through it, Tommy Reames and Professor Denham had reason to believe they could travel to another universe, of which other men had only dreamed. And it was important in other ways, too. At the moment Evelyn Denham threw the switch, last-edition newspapers in Chicago were showing headlines about “King” Jacaro’s forfeiture of two hundred thousand dollars’ bail by failing to appear in court. King Jacaro was a lord of racketeerdom.

While Tommy inspected the Tube anxiously, a certain chief of police in a small town upstate was telling feverishly over the telephone of a posse having killed a monster lizard by torchlight, having discovered it in the act of devouring a cow. The lizard was eight feet high, walked on its hind legs, and had a collar of solid gold about its neck. And jewel importers, in New York, were in anxious conference about a flood of untraced jewels upon the market. Their origin was unknown. The Fifth-Dimension Tube ultimately affected all of those affairs, and the Death Mist as well. And—though it was not considered dangerous then—everybody remembers the Death Mist now.

But at the moment Professor Denham stared at the Tube concernedly, his daughter Evelyn shivered from pure excitement as she looked at it, and a red-headed man named Smithers looked impassively from the Tube to Tommy Reames and back again. He’d done most of the mechanical work on the Tube’s parts, and he was as anxious as the rest. But nobody thought of the world outside the laboratory....