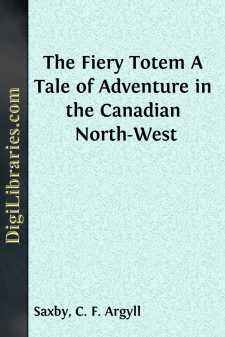 CHAPTER I A PERILOUS PASSAGE

"Well, good-bye, boys! You won't go far from camp before we return, will you?" The speaker was one of two men seated in an Indian canoe. He gripped the forward paddle, while his companion at the stern added cheerfully—

"The backwoods is not the City of London. There are no policemen to appeal to if you lose your way. Besides, we hope to find dinner waiting for our return. Hunting lost sons is not the same sport as hunting moose."

Both the boys laughed at the elder man's remark, and one—Bob Arnold by name—answered—

"Don't worry about us, father. Alf and I can take care of ourselves for half a day. Can't we, Alf?"

"Rather," the younger chum replied. "It's our respected parents who'll need to take care of themselves in unknown waters in that cockleshell." Then he called out merrily, imitating the tone of the first speaker—his father: "Take care of yourselves, dads! Remember the Athabasca River is not Regent Street!"

"Cheeky youngster!" returned the elder man banteringly, as he struck the forward paddle into the water. "There's not much of the invalid left about you after three months' camping."

Then with waving hands and pleasant chaffing, that showed what real good chums the quartette were, the men struck out for the centre of the river, leaving their sons watching from the strand before the camp that was pitched beneath the shadow of the great pine trees.

It was a glorious morning—just the right sort for a hunting-expedition. The air was just chilly enough to render paddling a welcome exercise, and just warm enough to allow intervals of pleasant drifting in the centre of the current when there were no shoals or driftwood to be avoided.

"Yes," remarked Holden, the younger of the two men, as the rhythm of the dripping paddles murmured pleasantly with Nature's music heard from leafy bough and bush; "yes, Alf's a different boy now. Who would have believed that these three short months would have changed a fever-wasted body into such a sturdy frame?"

"It looks like a miracle," returned the other man. "It was a great idea, that of a six months' trapping in the backwoods. When we get back to England we'll all four look as healthy as savages. My Bob is the colour of a redskin."

"It was a great blessing that you were able to bring him. It wouldn't have been half as enjoyable for Alf, not having a chum."

The elder man laughed softly as he turned a look of good-comradeship towards his companion.

"That's just as it ought to be, Holden," he said. "You and I were chums at school, chums at college, and now chums in business. It's the right thing that our sons should follow our good example. At least, that's my opinion."

"And you know it's mine," was the response. "But, I say! Do you think we are wise to keep quite in the centre of the current? It seems to be driving pretty hard, and we don't know the course. We might wish to land if we saw rapids."

"I dare say you are right," replied Arnold. "We'll steer straight across that bend ahead of us....