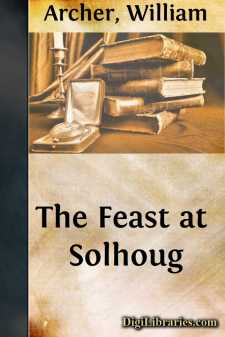 Exactly a year after the production of Lady Inger of Ostrat—that is to say on the "Foundation Day" of the Bergen Theatre, January 2, 1866—The Feast at Solhoug was produced. The poet himself has written its history in full in the Preface to the second edition. The only comment that need be made upon his rejoinder to his critics has been made, with perfect fairness as it seems to me, by George Brandes in the following passage:** "No one who is unacquainted with the Scandinavian languages can fully understand the charm that the style and melody of the old ballads exercise upon the Scandinavian mind. The beautiful ballads and songs of Des Knaben Wunderhorn have perhaps had a similar power over German minds; but, as far as I am aware, no German poet has has ever succeeded in inventing a metre suitable for dramatic purposes, which yet retained the mediaeval ballad's sonorous swing and rich aroma. The explanation of the powerful impression produced in its day by Henrik Hertz's Svend Dyring's House is to be found in the fact that in it, for the first time, the problem was solved of how to fashion a metre akin to that of the heroic ballads, a metre possessing as great mobility as the verse of the Niebelungenlied, along with a dramatic value not inferior to that of the pentameter. Henrik Ibsen, it is true, has justly pointed out that, as regards the mutual relations of the principal characters, Svend Dyring's House owes more to Kleist's Kathchen von Heubronn than The Feast at Solhoug owes to Svend Dyring's House. But the fact remains that the versified parts of the dialogue of both The Feast at Solhoug and Olaf Liliekrans are written in that imitation of the tone and style of the heroic ballad, of which Hertz was the happily-inspired originator. There seems to me to be no depreciation whatever of Ibsen in the assertion of Hertz's right to rank as his model. Even the greatest must have learnt from some one."

But while the influence of Danish lyrical romanticism is apparent in the style of the play, the structure, as it seems to me, shows no less clearly that influence of the French plot-manipulators which we found so unmistakably at work in Lady Inger. Despite its lyrical dialogue, The Feast at Solhoug has that crispiness of dramatic action which marks the French plays of the period. It may indeed be called Scribe's Bataille de Dames writ tragic. Here, as in the Bataille de Dames (one of the earliest plays produced under Ibsen's supervision), we have the rivalry of an older and a younger woman for the love of a man who is proscribed on an unjust accusation, and pursued by the emissaries of the royal power. One might even, though this would be forcing the point, find an analogy in the fact that the elder woman (in both plays a strong and determined character) has in Scribe's comedy a cowardly suitor, while in Ibsen's tragedy, or melodrama, she has a cowardly husband. In every other respect the plays are as dissimilar as possible; yet it seems to me far from unlikely that an unconscious reminiscence of the Bataille de Dames may have contributed to the shaping of The Feast at Solhoug in Ibsen's mind....