The Faust-Legend and Goethe's 'Faust'

by H. B. (Henry Bernard) Cotterill 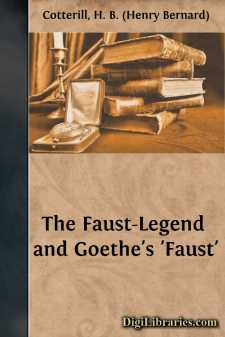 These lectures have been given perhaps half a dozen times, in England, in Switzerland and in Germany. On allowing them to appear in print I should perhaps apologize to my readers for the somewhat free and familiar style in which parts of them are written; but even if I had the time to recast them into a more serious form I should be unwilling to do so, for there is surely enough ponderous literature on the subject, and although some may resent in a book what often helps to make a lecture attractive, I think I can rely on the fact that many people agree with the dictum of Horace:

or, as Milton has it:

Joking decides great thingsStronger and better oft than earnest can.

Almost the only change that I have made in my MS. has been the substitution or addition of an English translation in numerous places where I had formerly quoted the German original. On some occasions, when first writing the lectures, I very probably used the English version of Faust by Bayard Taylor, but I have not the book at present at hand and cannot feel quite certain whether any of the verse translations are not my own. The little book makes of course no pretence to be a contribution to critical or biographical literature. It is meant especially for those who wish to know something more about the story of Faust and about Goethe's play, and who, because their knowledge of German does not suffice or for other reasons, are unable to study the subject in any more satisfactory way.

All of us have probably experienced the fact that it is possible to have been familiar for a long time with some great work of imagination—some poem or picture—to have learnt to love it almost as if it were a living person, to imagine that we understand it and appreciate it fully, even to fancy that it has a special message, a deeper meaning, for us than for almost any one else, and then to come across somebody—some commentator perhaps—who informs us that our uncritical appreciation is quite worthless, mere shallow sentiment, and that until we can accurately analyze and formulate the Idea which the artist endeavoured to incorporate in his work, and classify the diverse manifestations of this Idea as subjective, objective, symbolical, allegorical, dramatical-psychological or psychological-dramatical, we are not entitled to hold, far less to express, any opinion on the subject.

When I realised that I had undertaken to lecture on Faust, I thought it my duty to study Goethe's German commentators—some of them at least; for to study all would consume a lifetime. A few of the works of these commentators I already possessed—some, I am sorry to say, with their pages yet uncut. Others I procured, following the advice of German friends well versed in the matter....