The Fathers of the Constitution; a chronicle of the establishment of the Union 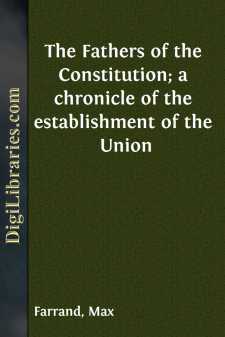 CHAPTER I. THE TREATY OF PEACE

"The United States of America"! It was in the Declaration of Independence that this name was first and formally proclaimed to the world, and to maintain its verity the war of the Revolution was fought. Americans like to think that they were then assuming "among the Powers of the Earth the equal and independent Station to which the Laws of Nature and of Nature's God entitle them"; and, in view of their subsequent marvelous development, they are inclined to add that it must have been before an expectant world.

In these days of prosperity and national greatness it is hard to realize that the achievement of independence did not place the United States on a footing of equality with other countries and that, in fact, the new state was more or less an unwelcome member of the world family. It is nevertheless true that the latest comer into the family of nations did not for a long time command the respect of the world. This lack of respect was partly due to the character of the American population. Along with the many estimable and excellent people who had come to British North America inspired by the best of motives, there had come others who were not regarded favorably by the governing classes of Europe. Discontent is frequently a healthful sign and a forerunner of progress, but it makes one an uncomfortable neighbor in a satisfied and conservative community; and discontent was the underlying factor in the migration from the Old World to the New. In any composite immigrant population such as that of the United States there was bound to be a large element of undesirables. Among those who came "for conscience's sake" were the best type of religious protestants, but there were also religious cranks from many countries, of almost every conceivable sect and of no sect at all. Many of the newcomers were poor. It was common, too, to regard colonies as inferior places of residence to which objectionable persons might be encouraged to go and where the average of the population was lowered by the influx of convicts and thousands of slaves.

"The great number of emigrants from Europe"—wrote Thieriot, Saxon Commissioner of Commerce to America, from Philadelphia in 1784—"has filled this place with worthless persons to such a degree that scarcely a day passes without theft, robbery, or even assassination."* It would perhaps be too much to say that the people of the United States were looked upon by the rest of the world as only half civilized, but certainly they were regarded as of lower social standing and of inferior quality, and many of them were known to be rough, uncultured, and ignorant. Great Britain and Germany maintained American missionary societies, not, as might perhaps be expected, for the benefit of the Indian or negro, but for the poor, benighted colonists themselves; and Great Britain refused to commission a minister to her former colonies for nearly ten years after their independence had been recognized.