by A. H. U. (Arthur Hugh Urquhart) Colquhoun 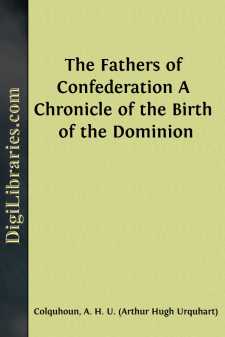 THE DAWN OF THE MOVEMENT

The sources of the Canadian Dominion must be sought in the period immediately following the American Revolution. In 1783 the Treaty of Paris granted independence to the Thirteen Colonies. Their vast territories, rich resources, and hardy population were lost to the British crown. From the ruins of the Empire, so it seemed for the moment, the young Republic rose. The issue of the struggle gave no indication that British power in America could ever be revived; and King George mournfully hoped that posterity would not lay at his door 'the downfall of this once respectable empire.'

But, disastrous as the war had proved, there still remained the fragments of the once mighty domain. If the treaty of peace had shorn the Empire of the Thirteen Colonies and the great region south of the Lakes, it had left unimpaired the provinces to the east and north—Nova Scotia, Newfoundland, and Canada—while still farther north and west an unexplored continent in itself, stretching to the Pacific Ocean, was either held in the tight grip of the Hudson's Bay Company or was shortly to be won by its intrepid rival, the North-West Company of Montreal. There were not lacking men of prescience and courage who looked beyond the misfortunes of the hour, and who saw in the dominions still vested in the crown an opportunity to repair the shattered empire and restore it to a modified splendour. A general union of the colonies had been mooted before the Revolution. The idea naturally cropped up again as a means of consolidating what was left. Those who on the king's side had borne a leading part in the conflict took to heart the lesson it conveyed. Foremost among these were Lord Dorchester, whom Canada had long known as Guy Carleton, and William Smith, the Loyalist refugee from New York, who was appointed chief justice of Lower Canada. Each had special claims to be consulted on the future government of the country. During the war Dorchester's military services in preserving Canada from the invaders had been of supreme value; and his occupation of New York after the peace, while he guided and protected the Loyalist emigration, had furnished a signal proof of his vigour and sagacity. William Smith belonged to a family of distinction in the old colony of New York. He possessed learning and probity. His devotion to the crown had cost him his fortune. It appears that it was with him, rather than with Dorchester, that the plan originated of uniting the British provinces under a central government. The two were close friends and had gone to England together. They came out to Quebec in company, the one as governor-general, the other as chief justice. The period of confusion, when constructive measures were on foot, suggested to them the need of some general authority which would ensure unity of administration.

And so, in October 1789, when Grenville, the secretary of state, sent to Dorchester the draft of the measure passed in 1791 to divide Quebec into Upper and Lower Canada, and invited such observations as 'experience and local knowledge may suggest,' Dorchester wrote:

I have to submit to the wisdom of His Majesty's councils, whether it may not be advisable to establish a general government for His Majesty's dominions upon this continent, as well as a governor-general, whereby the united exertions of His Majesty's North American Provinces may more effectually be directed to the general interest and to the preservation of the unity of the Empire....