The Farmer Boy; the Story of Jacob 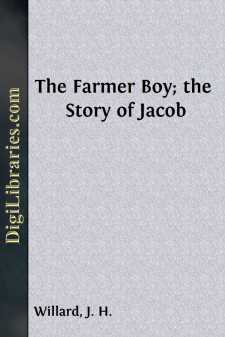 THE FARMER BOY THE STORY OF JACOB

Abraham, the father of the great Israelitish, or Hebrew, nation, was the chief, or sheikh, as he would be called now, of his family or tribe, and with his flocks of sheep, herds of cattle, camels and other animals, servants and followers, moved from place to place, adding to his wealth as time went on and making for himself a respected name wherever he went.

God chose Abraham to be the founder of this mighty nation, and at his death promised a continuation of His favor to his son Isaac, who had married Rebekah, the daughter of Bethuel, who was Abraham's nephew. Isaac was an only son and inherited his father's great wealth.

[Illustration: Abraham, the Founder of a Nation.]

Isaac and Rebekah had twin sons whose names were Esau and Jacob, and perhaps no brothers were ever more unlike in their dispositions. Esau grew up to be a hunter. Nothing pleased him so much as to take his bow and arrows and spend days away from home in the pursuit of deer, from whose flesh he made food which his father liked.

Among other customs of that time which seem strange to us now was that of rich men and their wives and their sons as well preparing food with their own hands, although it is done in the East to some extent in these days.

Abraham was certainly a rich man with a host of servants at command, yet the Bible tells us that Sarah, his wife, prepared with her own hands the food for the strangers who visited the patriarch as he sat in the door of his tent by the Oaks of Mamre. We can understand then that the sons of Isaac, who were even richer than his father, prepared food themselves.

Esau was looked upon as the older son and treated accordingly. There were certain privileges which by custom were given to oldest sons at their fathers' deaths, and these things constituted what was called a birthright. In addition to being treated as the older son Esau was also the favorite son of his father.

But Rebekah loved Jacob more than she did Esau. Jacob was of a much quieter disposition than his brother, living near his mother and probably spending much of his time with her. We may think of him as a man who liked to live in comfort and peace, hospitable to strangers, as was the custom of the country, yet all the time wishing, as he looked out over the flocks and herds, that his was to be an older brother's portion when they were divided.

The word Jacob means "supplanter," or one who takes the place of another, and Jacob acted up to the meaning of his name at the first opportunity. It came about in this way.

Jacob was cooking some food one day which smelt and looked very tempting to Esau when he came in hungry and tired to the point of exhaustion from one of his hunting trips. He asked his brother to give him some of this food, and Jacob, seeing a chance to acquire what he coveted, told him he would do so if he would give him his birthright in exchange for it. Probably Esau's hunger was more to him at the moment than any privileges he might have later in life, so he consented and the bargain was made.