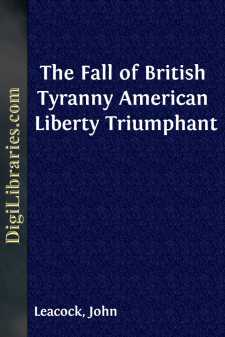 Among the elusive figures of early American Drama stands John Leacock, author of "The Fall of British Tyranny," published in 1776, in Philadelphia. Even more elusive is the identification, inasmuch as his name has been spelled variously Leacock, Lacock, and Laycock. To add to the confusion, Watson's "Annals of Philadelphia," on the reminiscent word of an old resident of that town, declares that Joseph Leacock penned "The Medley." "He wrote also a play, with good humour," says this authority, "called 'British Tyranny.'" On careful search of the files, no definite information in regard to Leacock has been forthcoming. The dedication to "The Fall of British Tyranny" was signed "Dick Rifle," but there is no information to be traced from this pseudonym.

Searching the Colonial Records of Pennsylvania, I discovered no less than three John Leacocks mentioned, all of whom were Coroners, as well as a Joseph Leacock, who occupied the same position. Examining the Records of the Pennsylvania Soldiers of the Revolution, I found several John Leacocks in the ranks as privates, and also one John Laycock.

Professor Moses Coit Tyler, in his "Literary History of the American Revolution" (ii, 198), giving a list of the characters in the play and the names of those supposed to be lampooned, analyzes the piece thoroughly, and says, "From internal evidence, it must be inferred that the writing of the play was finished after the publication of 'Common Sense' in January, 1776, and before the news had reached Philadelphia of the evacuation of Boston, March 17, 1776." Though Sabin takes for granted that Leacock wrote "The Fall of British Tyranny," Hildeburn, in the "Issues of the Press" (ii, 249), states that it is "said to have been written by Mr. Laycock of Philadelphia." If the John Leacock, whose name appears in the Philadelphia Directory of 1802, is the one who wrote "The Fall of British Tyranny," following that clue we find his name disappearing from the Directory in 1804. Hence, he must either have died, or have moved away from Philadelphia.

The elusive name of Leacock is to be considered also in connection with an opera entitled, "The Disappointment; or, The Force of Credulity," signed by Andrew Barton, supposed to be a pseudonym, and attributed variously to "Colonel" Thomas Forrest and to John Leacock. I already have had occasion to mention "The Disappointment" in connection with Godfrey's "The Prince of Parthia." The reader will remember that in 1767 "The Disappointment" was put into rehearsal, but was suddenly withdrawn in preference to Godfrey's piece. This play has been fully and interestingly analyzed by O. G. Sonneck, who gives the reasons for the withdrawal of the play from rehearsal by the American Company of Philadelphia, 1767. These reasons are definitely stated in the Pennsylvania Gazette for April 16, 1767, which contains this warning in the American Company's advertisement of "The Mourning Bride": "N.B. 'The Disappointment' (that was advertised for Monday), as it contains personal Reflections, is unfit for the Stage."

The reason why this piece is attributed to "Colonel" Thomas Forrest is that there is a memorandum in substantiation on the title-page of a copy owned by the Library Company of Philadelphia....