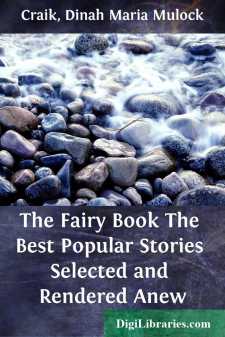 SLEEPING BEAUTY IN THE WOOD.

nce there was a royal couple who grieved excessively because they had no children. When at last, after long waiting, the queen presented her husband with a little daughter, his majesty showed his joy by giving a christening feast, so grand that the like of it was never known. He invited all the fairies in the land—there were seven altogether—to stand godmothers to the little princess; hoping that each might bestow on her some good gift, as was the custom of good fairies in those days.

After the ceremony, all the guests returned to the palace, where there was set before each fairy-godmother a magnificent covered dish, with an embroidered table-napkin, and a knife and fork of pure gold, studded with diamonds and rubies. But alas! as they placed themselves at table, there entered an old fairy who had never been invited, because more than fifty years since she had left the king's dominion on a tour of pleasure, and had not been heard of until this day. His majesty, much troubled, desired a cover to be placed for her, but it was of common delf, for he had ordered from his jeweller only seven gold dishes for the seven fairies aforesaid. The elderly fairy thought herself neglected, and muttered angry menaces, which were overheard by one of the younger fairies, who chanced to sit beside her. This good godmother, afraid of harm to the pretty baby, hastened to hide herself behind the tapestry in the hall. She did this, because she wished all the others to speak first—so that if any ill gift were bestowed on the child, she might be able to counteract it.

The six now offered their good wishes—which, unlike most wishes, were sure to come true. The fortunate little princess was to grow up the fairest woman in the world; to have a temper sweet as an angel; to be perfectly graceful and gracious; to sing like a nightingale; to dance like a leaf on a tree; and to possess every accomplishment under the sun. Then the old fairy's turn came. Shaking her head spitefully, she uttered the wish that when the baby grew up into a young lady, and learned to spin, she might prick her finger with the spindle and die of the wound.

At this terrible prophecy all the guests shuddered; and some of the more tender-hearted began to weep. The lately happy parents were almost out of their wits with grief. Upon which the wise young fairy appeared from behind the tapestry, saying cheerfully "Your majesties may comfort yourselves; the princess shall not die. I have no power to alter the ill-fortune just wished her by my ancient sister—her finger must be pierced; and she shall then sink, not into the sleep of death, but into a sleep that will last a hundred years. After that time is ended, the son of a king will find her, awaken her, and marry her."

Immediately all the fairies vanished.

The king, in the hope of avoiding his daughter's doom, issued an edict, forbidding all persons to spin, and even to have spinning-wheels in their houses, on pain of instant death. But it was in vain....