The Fables of Ph?drus Literally translated into English prose with notes 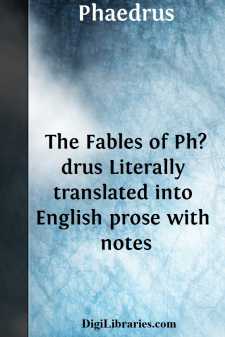 Fable I.THE WOLF AND THE LAMB.

Driven by thirst, a Wolf and a Lamb had come to the same stream; the Wolf stood above, and the Lamb at a distance below. Then, the spoiler, prompted by a ravenous maw, alleged a pretext for a quarrel. “Why,” said he, “have you made the water muddy for me while I am drinking?” The Fleece-bearer, trembling, answered: “Prithee, Wolf, how can I do what you complain of? The water is flowing downwards from you to where I am drinking.” The other, disconcerted by the force of truth, exclaimed: “Six months ago, you slandered me.” “Indeed,” answered the Lamb, “I was not born then.” “By Hercules,” said the Wolf, “then ’twas your father slandered me;” and so, snatching him up, he tore him to pieces, killing him unjustly.

This Fable is applicable to those men who, under false pretences, oppress the innocent.

When Athens was flourishing under just laws, liberty grown wanton embroiled the city, and license relaxed the reins of ancient discipline. Upon this, the partisans of factions conspiring, Pisistratus the Tyrant seized the citadel. When the Athenians were lamenting their sad servitude (not that he was cruel, but because every burden is grievous to those who are unused to it), and began to complain, Æsop related a Fable to the following effect:—

“The Frogs, roaming at large in their marshy fens, with loud clamour demanded of Jupiter a king, who, by his authority, might check their dissolute manners. The Father of the Gods smiled, and gave them a little Log, which, on being thrown among them startled the timorous race by the noise and sudden commotion in the bog. When it had lain for some time immersed in the mud, one of them by chance silently lifted his head above the water, and having taken a peep at the king, called up all the rest. Having got the better of their fears, vying with each other, they swim towards him, and the insolent mob leap upon the Log. After defiling it with every kind of insult, they sent to Jupiter, requesting another king, because the one that had been given them was useless. Upon this, he sent them a Water Snake, who with his sharp teeth began to gobble them up one after another. Helpless they strive in vain to escape death; terror deprives them of voice. By stealth, therefore, they send through Mercury a request to Jupiter, to succour them in their distress. Then said the God in reply: ‘Since you would not be content with your good fortune, continue to endure your bad fortune.’”

“Do you also, O fellow-citizens,” said Æsop, “submit to the present evil, lest a greater one befall you.”

That one ought not to plume oneself on the merits which belong to another, but ought rather to pass his life in his own proper guise, Æsop has given us this illustration:—

A Jackdaw, swelling with empty pride, picked up some feathers which had fallen from a Peacock, and decked himself out therewith; upon which, despising his own kind, he mingled with a beauteous flock of Peacocks....