The Expansion of Europe The Culmination of Modern History 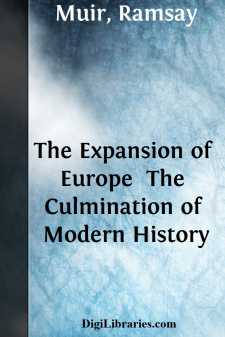 The purpose of this book is twofold.

We realise to-day, as never before, that the fortunes of the world, and of every individual in it, are deeply affected by the problems of world-politics and by the imperial expansion and the imperial rivalries of the greater states of Western civilisation. But when men who have given no special attention to the history of these questions try to form a sound judgment on them, they find themselves handicapped by the lack of any brief and clear resume of the subject. I have tried, in this book, to provide such a summary, in the form of a broad survey, unencumbered with detail, but becoming fuller as it comes nearer to our own time. That is my first purpose. In fulfilling it I have had to cover much well-trodden ground. But I hope I have avoided the aridity of a mere compendium of facts.

My second purpose is rather more ambitious. In the course of my narrative I have tried to deal with ideas rather than with mere facts. I have tried to bring out the political ideas which are implicit in, or which result from, the conquest of the world by Western civilisation; and to show how the ideas of the West have affected the outer world, how far they have been modified to meet its needs, and how they have developed in the process. In particular I have endeavoured to direct attention to the significant new political form which we have seen coming into existence, and of which the British Empire is the oldest and the most highly developed example—the world-state, embracing peoples of many different types, with a Western nation-state as its nucleus. The study of this new form seems to me to be a neglected branch of political science, and one of vital importance. Whether or not it is to be a lasting form, time alone will show. Finally I have tried to display, in this long imperialist conflict, the strife of two rival conceptions of empire: the old, sterile, and ugly conception which thinks of empire as mere domination, ruthlessly pursued for the sole advantage of the master, and which seems to me to be most fully exemplified by Germany; and the nobler conception which regards empire as a trusteeship, and which is to be seen gradually emerging and struggling towards victory over the more brutal view, more clearly and in more varied forms in the story of the British Empire than in perhaps any other part of human history. That is why I have given a perhaps disproportionate attention to the British Empire. The war is determining, among other great issues, which of these conceptions is to dominate the future.

In its first form this book was completed in the autumn of 1916; and it contained, as I am bound to confess, some rather acidulated sentences in the passages which deal with the attitude of America towards European problems. These sentences were due to the deep disappointment which most Englishmen and most Frenchmen felt with the attitude of aloofness which America seemed to have adopted towards the greatest struggle for freedom and justice ever waged in history. It was an indescribable satisfaction to be forced by events to recognise that I was wrong, and that these passages of my book ought not to have been written as I wrote them....