The Excavations of Roman Baths at Bath 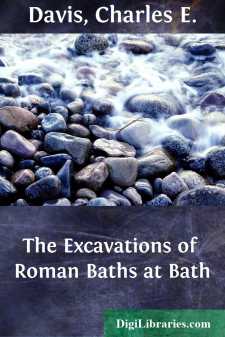 ON THE EXCAVATIONS OF THE ROMAN BATHS AT BATH. Re-printed from the Transactions of the Bristol and Gloucestershire Archæological Society. Vol. VIII., part I.

Leland, on his visit to Bath in the year 1530, with tolerable fulness describes the baths, and after completing his description of the King's Bath goes on to say "Ther goith a sluse out of this Bath and servid in Tymes past with Water derivid out of it 2 places in Bath Priorie usid for Bathes: els voide; for in them be no springes;" and further on he says "The water that goith from the Kinges Bath turnith a Mylle and after goith into Avon above Bath-bridge."

These two sentences have hitherto been difficult of explanation, but the excavations, which it has been my good fortune to superintend, and the discoveries I have made, have fully explained Leland's meaning, at the same time that I have brought to light the great Roman Bath, which I purpose describing in detail in this paper, writing only of previous excavations and those I have conducted in connection with this work, so far as their description may the more fully render my account perfect of the Great Bath itself. I desire to confine my paper within such limits as the space afforded me in this Journal necessarily imposes.

Some time during the last century the ruins of a mill wheel were found to the south of the King's Bath. I have in my excavation discovered the mediæval sluice that led to this wheel. Leland speaks of "two places in Bath Priorie used for Bathes els voide."

In a map of Bath preserved in the Sloane Collection of the British Museum, drawn by William Smith (Rouge Dragon Pursuivant at Arms) a few years previous to 1568, is an open bath immediately to the south of the Transept of the Abbey called "the mild Bathe." This, or at any rate what I may consider was the "mild bath," I found in my explorations beneath the soil at a situation in York Street, connected with the Hot-water drains, the bath being still provided with a wooden hatch, and of the dimensions of a good sized room. The other place mentioned by Leland was discovered in 1755, and this discovery led the way to the excavations of a great bath (afterwards called Lucas's Bath), when the eastern wall of the great Hall of the recently found bath was first laid open, although from its position not having been properly noted previous to its being covered up, its situation remained unknown for nearly 130 years.

In Dr. Sutherland's "Attempts to revive Ancient Medical Doctrines," (page 16), et infra, he says: "In the year of our Lord 1755 the old Priory or Abbey house was pulled down. In clearing away the foundations, stone coffins, bones of various animals, and other things were found. This moved curiosity to search still deeper. Hot mineral waters gushed forth and interrupted the work. The old Roman sewer was at last found; the water was drained off. Foundations of regular buildings were fairly traced." An illustration of these discoveries is given in Gough's "Camden," and a plan of them was published by Dr. Lucas and again by Dr....