The Evolution of the Dragon 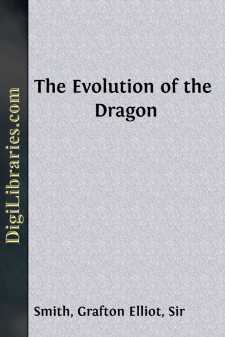 Some explanation is due to the reader of the form and scope of these elaborations of the lectures which I have given at the John Rylands Library during the last three winters.

They deal with a wide range of topics, and the thread which binds them more or less intimately into one connected story is only imperfectly expressed in the title "The Evolution of the Dragon".

The book has been written in rare moments of leisure snatched from a variety of arduous war-time occupations; and it reveals only too plainly the traces of this disjointed process of composition. On 23 February, 1915, I presented to the Manchester Literary and Philosophical Society an essay on the spread of certain customs and beliefs in ancient times under the title "On the Significance of the Geographical Distribution of the Practice of Mummification," and in my Rylands Lecture two weeks later I summed up the general conclusions. In view of the lively controversies that followed the publication of the former of these addresses, I devoted my next Rylands Lecture (9 February, 1916) to the discussion of "The Relationship of the Egyptian Practice of Mummification to the Development of Civilization". In preparing this address for publication in the Bulletin some months later so much stress was laid upon the problems of "Incense and Libations" that I adopted this more concise title for the elaboration of the lecture which forms the first chapter of this book. This will explain why so many matters are discussed in that chapter which have little or no connexion either with "Incense and Libations" or with "The Evolution of the Dragon".

The study of the development of the belief in water's life-giving attributes, and their personification in the gods Osiris, Ea, Soma [Haoma] and Varuna, prepared the way for the elucidation of the history of "Dragons and Rain Gods" in my next lecture (Chapter II). What played a large part in directing my thoughts dragon-wards was the discussion of certain representations of the Indian Elephant upon Precolumbian monuments in, and manuscripts from, Central America (Nature, 25 Nov., 1915; 16 Dec., 1915; and 27 Jan., 1916). For in the course of investigating the meaning of these remarkable designs I discovered that the Elephant-headed rain-god of America had attributes identical with those of the Indian Indra (and of Varuna and Soma) and the Chinese dragon. The investigation of these identities established the fact that the American rain-god was transmitted across the Pacific from India via Cambodia.

The intensive study of dragons impressed upon me the importance of the part played by the Great Mother, especially in her Babylonian avatar as Tiamat, in the evolution of the famous wonder-beast. Under the stimulus of Dr. Rendel Harris's Rylands Lecture on "The Cult of Aphrodite," I therefore devoted my next address (14 November, 1917) to the "Birth of Aphrodite" and a general discussion of the problems of Olympian obstetrics.

Each of these addresses was delivered as an informal demonstration of large series of lantern projections; and, as Mr. Guppy insisted upon the publication of the lectures in the Bulletin, it became necessary, as a rule, many months after the delivery of each address, to rearrange my material and put into the form of a written narrative the story which had previously been told mainly by pictures and verbal comments upon them.

In making these elaborations additional facts were added and new points of view emerged, so that the printed statements bear little resemblance to the lectures of which they pretend to be reports. Such transformations are inevitable when one attempts to make a written report of what was essentially an ocular demonstration, unless every one of the numerous pictures is reproduced.

Each of the first two lectures was printed before the succeeding lecture was set up in type. For these reasons there is a good deal of repetition, and in successive lectures a wider interpretation of evidence mentioned in the preceding addresses....