The Evolution of Man - Volume 2 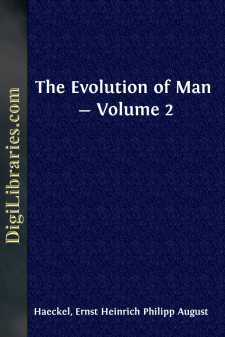 In turning from the embryology to the phylogeny of man—from the development of the individual to that of the species—we must bear in mind the direct causal connection that exists between these two main branches of the science of human evolution. This important causal nexus finds its simplest expression in "the fundamental law of organic development," the content and purport of which we have fully considered in the first chapter. According to this biogenetic law, ontogeny is a brief and condensed recapitulation of phylogeny. If this compendious reproduction were complete in all cases, it would be very easy to construct the whole story of evolution on an embryonic basis. When we wanted to know the ancestors of any higher organism, and, therefore, of man—to know from what forms the race as a whole has been evolved we should merely have to follow the series of forms in the development of the individual from the ovum; we could then regard each of the successive forms as the representative of an extinct ancestral form. However, this direct application of ontogenetic facts to phylogenetic ideas is possible, without limitations, only in a very small section of the animal kingdom. There are, it is true, still a number of lower invertebrates (for instance, some of the Zoophyta and Vermalia) in which we are justified in recognising at once each embryonic form as the historical reproduction, or silhouette, as it were, of an extinct ancestor. But in the great majority of the animals, and in the case of man, this is impossible, because the embryonic forms themselves have been modified through the change of the conditions of existence, and have lost their original character to some extent. During the immeasurable course of organic history, the many millions of years during which life was developing on our planet, secondary changes of the embryonic forms have taken place in most animals. The young of animals (not only detached larvae, but also the embryos enclosed in the womb) may be modified by the influence of the environment, just as well as the mature organisms are by adaptation to the conditions of life; even species are altered during the embryonic development. Moreover, it is an advantage for all higher organisms (and the advantage is greater the more advanced they are) to curtail and simplify the original course of development, and thus to obliterate the traces of their ancestors. The higher the individual organism is in the animal kingdom, the less completely does it reproduce in its embryonic development the series of its ancestors, for reasons that are as yet only partly known to us. The fact is easily proved by comparing the different developments of higher and lower animals in any single stem.

In order to appreciate this important feature, we have distributed the embryological phenomena in two groups, palingenetic and cenogenetic. Under palingenesis we count those facts of embryology that we can directly regard as a faithful synopsis of the corresponding stem-history. By cenogenesis we understand those embryonic processes which we cannot directly correlate with corresponding evolutionary processes, but must regard as modifications or falsifications of them. With this careful discrimination between palingenetic and cenogenetic phenomena, our biogenetic law assumes the following more precise shape:—The rapid and brief development of the individual (ontogeny) is a condensed synopsis of the long and slow history of the stem (phylogeny): this synopsis is the more faithful and complete in proportion as the original features have been preserved by heredity, and modifications have not been introduced by adaptation.

In order to distinguish correctly between palingenetic and cenogenetic phenomena in embryology, and deduce sound conclusions in connection with stem-history, we must especially make a comparative study of the former. In doing this it is best to employ the methods that have long been used by geologists for the purpose of establishing the succession of the sedimentary rocks in the crust of the earth. This solid crust, which encloses the glowing central mass like a thin shell, is composed of different kinds of rocks: there are, firstly, the volcanic rocks which were formed directly by the cooling at the surface of the molten mass of the earth; secondly, there are the sedimentary rocks, that have been made out of the former by the action of water, and have been laid in successive strata at the bottom of the sea. Each of these sedimentary strata was at first a soft layer of mud; but in the course of thousands of years it condensed into a solid, hard mass of stone (sandstone, limestone, marl, etc.), and at the same time permanently preserved the solid and imperishable bodies that had chanced to fall into the soft mud. Among these bodies, which were either fossilised or left characteristic impressions of their forms in the soft slime, we have especially the more solid parts of the animals and plants that lived and died during the deposit of the slimy strata.

Hence each of the sedimentary strata has its characteristic fossils, the remains of the animals and plants that lived during that particular period of the earth's history. When we make a comparative study of these strata, we can survey the whole series of such periods. All geologists are now agreed that we can demonstrate a definite historical succession in the strata, and that the lowest of them were deposited in very remote, and the uppermost in comparatively recent, times. However, there is no part of the earth where we find the series of strata in its entirety, or even approximately complete. The succession of strata and of corresponding historical periods generally given in geology is an ideal construction, formed by piecing together the various partial discoveries of the succession of strata that have been made at different points of the earth's surface (cf....