The Evolution of Dodd 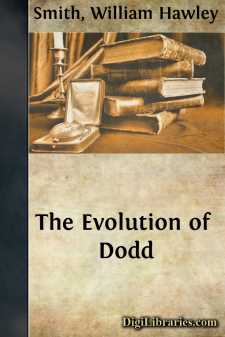 There was joy in the Weaver household when the child was born, and when it had been duly announced that it was a boy. The event was the first of the kind in this particular branch of the Weaver family, and, as is always the case, there was such rejoicing as does not come with the recurrence of like episodes. A man hardly feels sure of his manhood till the magic word father is put in the vocative case and applied to him direct, and the apotheosis of woman comes with maternity.

There is nothing remarkable about all this. It is the same the world around. But it is the usual that demands most of our time and attention here below, whether we wish it so or otherwise; and although we are everlastingly running after the strange and eccentric in human nature, as well as in all other branches of creation, it is the rule and not the exception that we have to deal with during most of our lives.

This Weaver family, father and mother, were much like other young fathers and mothers, and their child was not unlike other first-born children. His first low cry and his struggle for breath were just such as the officiating doctor had witnessed a hundred times, and doubtless his last moan and gasp will be such as the attending physician will have seen many a time and oft.

It is not the unusual that this brief tale has to deal with.

Yet, with all of these points held in common with the rest of the race, the hero of the adventures herein chronicled had an individuality that was his own, and most thoroughly so. This, too, is common. Most people have an individuality, if they can only find it! A good many men never do find this quality in themselves, having it crushed out by the timid or designing people who take charge of their education, so called; but for all that, to every man is given a being unlike that of any other in all the world, and it is the business of each, for himself, to make the most of his own peculiar gift, and for all his teachers and all systems of education to help him in his heaven-ordained task.

The young Weaver, whose advent has just been mentioned, was an individual. The nurse became conscious of it before he was an hour old, and the same impression has been received by all of his since-acquired acquaintances. He was a boy with a way of his own. He came into a world where there are crowds possessed of the same characteristics. It is a marvel, how, in such a multitude of differences, either he or the rest of us get along, even as well as we do.

When it came to naming the child, he was called "Dodd."

"Dodd" was the short for Doddridge, and the full appellation given to the youth at his christening, when he was two months old, was Doddridge Watts Weaver, a name which the officiating clergyman pronounced with great unction, and in the prayer after baptism made mention of again, asking heaven to grant that the mantle of both the old worthies whose names the child bore might fall upon the little body wrapped up in an embroidered blanket and held on the shoulder of the good woman who stood before the altar....