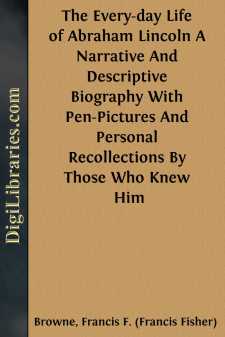 The year 1809—that year which gave William E. Gladstone to England—was in our country the birth-year of him who wears the most distinguished name that has yet been written on the pages of American history—ABRAHAM LINCOLN. In a rude cabin in a clearing, in the wilds of that section which was once the hunting-ground and later the battle-field of the Cherokees and other war-like tribes, and which the Indians themselves had named Kentucky because it was "dark and bloody ground," the great War President of the United States, after whose name History has written the word "Emancipator," first saw the light. Born and nurtured in penury, inured to hardship, coarse food, and scanty clothing,—the story of his youth is full of pathos. Small wonder that when asked in his later years to tell something of his early life, he replied by quoting a line from Gray's Elegy:

"The short and simple annals of the poor."

Lincoln's ancestry has been traced with tolerable certainty through five generations to Samuel Lincoln of Norfolk County, England. Not many years after the landing of the "Mayflower" at Plymouth—perhaps in the year 1638—Samuel Lincoln's son Mordecai had emigrated to Hingham, Massachusetts. Perhaps because he was a Quaker, a then persecuted sect, he did not remain long at Hingham, but came westward as far as Berks County, Pennsylvania. His son, John Lincoln, went southward from Pennsylvania and settled in Rockingham County, Virginia. Later, in 1782, while the last events of the American Revolution were in progress, Abraham Lincoln, son of John and grandfather of President Lincoln, moved into Kentucky and took up a tract of government land in Mercer County. In the Field Book of Daniel Boone, the Kentucky pioneer, (now in possession of the Wisconsin Historical Society), appears the following note of purchase:

"Abraham Lincoln enters five hundred acres of land on a Treasury warrant on the south side of Licking Creek or River, in Kentucky."

At this time Kentucky was included within the limits and jurisdiction of Virginia. In 1775 Daniel Boone had built a fort at Boonesborough, on the Kentucky river, and it was not far from this site that Abraham Lincoln, President Lincoln's grandfather, located his claim and put up a rude log hut for the shelter of his family. The pioneers of Kentucky cleared small spaces and erected their humble dwellings. They had to contend not only with the wild forces of nature, and to defend themselves from the beasts of the forest,—more to be feared than either were the hostile Indians....