The Eventful History of the Mutiny and Piratical Seizure of H.M.S. Bounty: Its Cause and Consequences 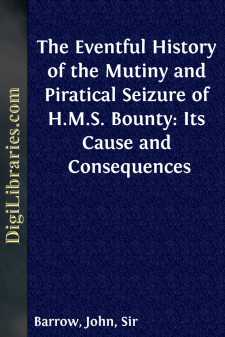 The gentle island, and the genial soil,The friendly hearts, the feasts without a toil,The courteous manners but from nature caught,The wealth unhoarded, and the love unbougnt,

The reign of George III will be distinguished in history by the great extension and improvement which geographical knowledge received under the immediate auspices of this sovereign. At a very early period, after his accession to the throne of these realms, expeditions of discovery were undertaken, 'not (as Dr. Hawkesworth observes) with a view to the acquisition of treasure, or the extent of dominion, but for the improvement of commerce, and the increase and diffusion of knowledge.' This excellent monarch was himself no mean proficient in the science of geography; and it may be doubted if any one of his subjects, at the period alluded to, was in possession of so extensive or so well-arranged a cabinet of maps and charts as his was, or who understood their merits or their defects so well as he did.

The first expeditions that were sent forth, after the conclusion of the war, were those of Byron, Wallis, and Carteret. In the instructions to the first of these commanders it is said, 'there is reason to believe that lands and islands of great extent, hitherto unvisited by any European power, may be found in the Atlantic Ocean, between the Cape of Good Hope and the Magellanic Strait, within the latitudes convenient for navigation, and in climates adapted to the produce of commodities useful in commerce.' It could not require much knowledge or consideration to be assured that, between the Cape and the Strait, climates producing commodities useful in commerce, with the exception of whales and seals, were likely to be found. The fact was that, among the real objects of this and other subsequent voyages, there was one which had engaged the attention of certain philosophers, from the time of the Spanish navigator, Quiros: this able navigator had maintained that a Terra Australis incognita must necessarily exist, somewhere in the high latitudes of the southern hemisphere, to counterbalance the great masses of land in those of the northern one, and thus maintain a just equipoise of the globe.

While these expeditions were in progress, the Royal Society, in 1768, addressed an application to the king, praying him to appoint a ship of war to convey to the South Seas Mr. Alexander Dalrymple (who had adopted the opinion of Quiros), and certain others, for the main purpose, however, of observing the transit of Venus over the sun's disc, which was to happen in the year 1769. By the king's command, a bark of three hundred and seventy tons was taken up by the Admiralty to perform this service, but, as Mr....