The Eurhythmics of Jaques-Dalcroze 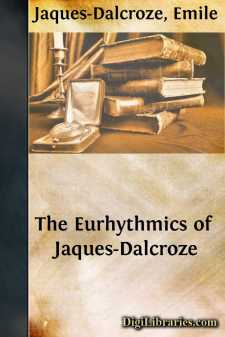 THE EDUCATIONAL SIGNIFICANCE OF HELLERAU

At Hellerau two things make an ineffaceable impression upon the mind—the exquisite beauty of movement, of gesture and of grouping seen in the exercises; and the nearness of a great force, fundamental to the arts and expressing itself in the rhythm to which they attain. Jaques-Dalcroze has re-opened a door which has long been closed. He has rediscovered one of the secrets of Greek education.

A hundred years ago Wilhelm von Humboldt endeavoured to make Greek ideals the paramount influence in the higher schools of Germany. He and a group of friends had long felt indignant at the utilitarianism and shallowness of the work of the schools. In Greek literature, Greek philosophy and Greek art would be found a means of kindling new life in education and of giving it the power of building up strong and independent personalities. When there came to Humboldt the unexpected opportunity of reforming the secondary schools of Prussia, he so remodelled the course of study as to secure for Greek thought and letters a place which, if not central and determinative, would at least bring the élite of the younger generation in some measure under their influence. But his administrative orders failed to impart to the schools the spirit of ancient Greece. To Humboldt and his friends Greek studies had been an inspiration because, apart from their intellectual significance and literary form, those studies had been the channel of an artistic impulse and had been entered into as art. But this artistic power was not felt by the greater number of those who undertook, in obedience to the new regulations, the duty of teaching Greek in the schools. What was left in Greek studies after this failure of artistic insight was often no more than another form of purely intellectual discipline. A new subject had been added to the curriculum, but new life had not been brought into the schools. The very name, Gymnasium, which denoted their Hellenic purpose, seemed ironical. They were not Greek in spirit and they ignored the training of the body. Thus what Wilhelm von Humboldt had chiefly aimed at accomplishing, he failed to do. It was not the power of Greek art that he brought into the schools but, in most cases, merely the philological study of a second dead language. The cause of his failure was that he had not discovered the educational method which could effectually secure his purpose. He had assumed that, in order to introduce the Greek spirit into education, it was sufficient to insist upon the linguistic and literary study of Greek.

In time, attempts were made to remedy what was defective in Humboldt's plan by insisting upon physical exercises as an obligatory part of education in the higher schools. But the physical exercises thus introduced, though salutary in themselves, were divorced from the artistic influences of the Greek gymnastic. Humboldt's chief aim had been forgotten. His system of organization had rooted itself, but his educational ideal, to which he attached far greater importance than to administrative regulation, was ignored....