The Eugenic Marriage, Volume I. (of IV.) A Personal Guide to the New Science of Better Living and Better Babies 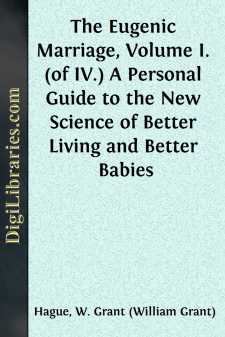 Despite the fact that much has been written during the past two or three years with reference to Eugenics, it is quite evident to any one interested in the subject that the average intelligent individual knows very little about it so far as its scope and intent are concerned. This is not to be wondered at, for the subject has not been presented to the ordinary reader in a form that would tend to encourage inquiry or honest investigation. The critic and the wit have deliberately misinterpreted its principles, and have almost succeeded in masking its supreme function in the garb of folly.

The writer has yet to meet a conscientious mother who fails to evince a reasonable degree of enthusiastic interest in eugenics when properly informed of its fundamental principles.

The eugenic ideal is a worthy race—a race of men and women physically and mentally capable of self-support. The eugenist, therefore, demands that every child born shall be a worthy child—a child born of healthy, selected parents.

No one can successfully assail the ethics of this appeal. It is morally a just contention to strive for a healthy race. It is also an economic necessity as we shall see.

The history of the world informs us that there have been many civilizations which, in some respects, equalled our own. These races of people have all achieved a certain success, and have then passed entirely out of existence. Why? And are we destined to extinction in the same way? We know that the cause of the decline and ultimate extinction of all past civilizations was due primarily to the moral decadence of their people. Disease and vice gradually sapped their vitality, and their continuance was impossible. It would seem to be the destiny of a race to achieve material prosperity at the expense of its morality. When conditions render possible the fulfilment of every human desire, the race exhausts its vitality in a surfeitment of caprice. The animal instincts predominate, and the potential vigor of the people is exhausted in contributing to its own amusement. Each succeeding civilization has reached this epochal period, and has fallen, victim of the rapacity of stronger and younger invading antagonists, themselves to succumb to the same insidious process.

The present civilization has reached this epochal—this transition—period. In one hundred years from now we shall either have accomplished what no previous civilization accomplished, or we shall have ceased to exist as a race. Our success depends on the response of the people to the eugenic appeal. Few appreciate the responsibility involved.

It is not necessary, however, to combat or deplore the evils of the past. Civilization has failed in the task of race-maintenance; it failed, however, in ignorance. We cannot plead the same excuse. We are face to face with conditions that we must solve quickly or our destiny will be decreed before we apply the remedy.

A function of the eugenist is to gather and attest statistics, and to establish conclusions based on these statistics....