The Eugenic Marriage, Vol. 2 A Personal Guide to the New Science of Better Living and Better Babies 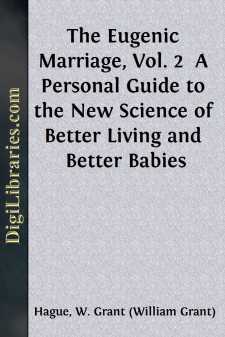 "The evil that men do lives after them. The good is often interred with them."

"The pleasure in living is to meet temptation and not yield to it." Elmer Lee, M. D.

A Word to Parents.—Within recent times the subject of sex hygiene has been freely discussed by members of the medical profession and through them the general public has been made more or less acquainted with the problem. It has therefore acquired a degree of genuine interest which speaks well for the future of the eugenic ideal. Eugenics is based to a very large extent upon the principles underlying sex hygiene.

As a result of this widespread interest and investigation, we have discovered that the only method that promises actual progress, is to talk plainly and to tell the actual truth. The day of the prude has passed. To attempt to achieve results in the education of youth in sex problems, without giving, facts, is wasted effort. To give facts we must explain each problem so that its principles may be clearly understood and its meaning grasped. To point out the duty of youth is not sufficient. They must be shown why it is to their best interest to live the clean life. In every department of education we are beginning to appreciate that to achieve results it must be based upon the individual equation. This is why we have found it necessary to assert that it is the duty of parents to make sex hygiene a personal matter and to acquaint their children with the facts relating to this problem. It has been discovered, however, that a very large percentage of parents are inadequately informed on these subjects, in fact they know practically nothing about the actual facts which they are supposed to teach. I shall try to tell the story in a way which every parent will understand.

When a boy reaches the age of puberty he is susceptible to sexual desire. If he has not been told the story of his growth from boyhood to man's estate he will either begin to abuse himself, or he will be later enticed to commit himself to intercourse with some unclean female and he will acquire a disease as a result....