The Etiquette of To-day

by Edith B. (Edith Bertha) Ordway 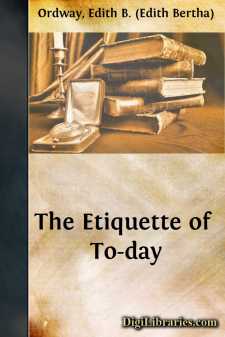 THE REWARDS OF ETIQUETTE

Society is a game which all men play. "Etiquette" is the name given the rules of the game. If you play it well, you win. If you play it ill, you lose. The prize is a certain sort of happiness without which no human being is ever quite satisfied.

Because the demand for social happiness is thus fundamental in human nature, the game has to be played quite seriously. If played seriously, it is perforce successful, even when the outward signs of triumph are lacking. Played seriously, it becomes a worthy part of the great enterprise of noble living, the science of which is called "Ethics." Therefore the best etiquette is that which is based upon the fundamental principles of ethics.

The etiquette, as well as the ethics, of to-day may well be summed up in the one maxim known as the "Golden Rule": "Do unto others as you would that others should do unto you." Or in the philosophic statement of it, given by Kant: "Act so that the maxim of thy conduct shall be fit to be universal law."

A certain social sense is, therefore, the foundation upon which all concerted action rests; and this, permeating the character and winning conformity in the life, produces a social order which is at once the criterion of civilization and the source of its power.

Every social code presupposes the trained personality, that is, the individual who is intelligent enough and controlled enough to conform to the rules prescribed for the good of all. It is only in the common good that true individual good can be found. Therefore is it so essential that every man regard his brother's welfare as anxiously as his own, and permit himself to be curbed in his extravagances, limited in the indulgence of even legitimate desires, in order that he may not defraud another, or menace the general well-being.

Not only in social life, but in business, politics, and international relations, this principle of the common good as the ultimate goal, the supreme authority for conduct, holds good. To it society approaches, now by direct progress and now by seeming reaction, but ever with a higher evaluation of justice. This is shown in the fulfillment of both small and large obligations.

Following the rules of courtesy, men give to each other that deference which each believes is his own due, and each receives in return twofold the deference that he sincerely gives. Men show, at home and abroad, the courtesy to women in general that they would wish shown to those of their family, and thereby the standard of respect for woman is so lifted that even the city street at night is a safe place for a woman to pass unaccosted, if it is necessary for her to go unattended.

Rigidly do we hold ourselves to the established rules of good breeding, endeavoring to make of ourselves all that Nature will permit; and we are surprised to find that Nature's own gentlemen and gentlewomen gather about us, and rare souls look to us for companionship, as finding in us kindred spirits.

No field so surely bears a like harvest as the one sown with the seeds of good-will and consideration for others....