The Ethics of Cooperation 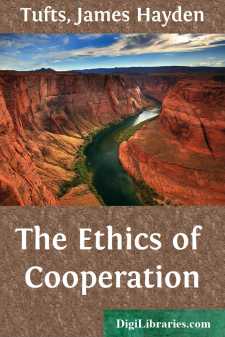 According to Plato's famous myth, two gifts of the gods equipped man for living: the one, arts and inventions to supply him with the means of livelihood; the other, reverence and justice to be the ordering principles of societies and the bonds of friendship and conciliation. Agencies for mastery over nature and agencies for coöperation among men remain the two great sources of human power. But after two thousand years, it is possible to note an interesting fact as to their relative order of development in civilization. Nearly all the great skills and inventions that had been acquired up to the eighteenth century were brought into man's service at a very early date. The use of fire, the arts of weaver, potter, and metal worker, of sailor, hunter, fisher, and sower, early fed man and clothed him. These were carried to higher perfection by Egyptian and Greek, by Tyrian and Florentine, but it would be difficult to point to any great new unlocking of material resources until the days of the chemist and electrician. Domestic animals and crude water mills were for centuries in man's service, and until steam was harnessed, no additions were made of new powers.

During this long period, however, the progress of human association made great and varied development. The gap between the men of Santander's caves, or early Egypt, and the civilization of a century ago is bridged rather by union of human powers, by the needs and stimulating contacts of society, than by conquest in the field of nature. It was in military, political, and religious organization that the power of associated effort was first shown. Army, state, and hierarchy were its visible representatives. Then, a little over a century ago, began what we call the industrial revolution, still incomplete, which combined new natural forces with new forms of human association. Steam, electricity, machines, the factory system, railroads: these suggest the natural forces at man's disposal; capital, credit, corporations, labor unions: these suggest the bringing together of men and their resources into units for exploiting or controlling the new natural forces. Sometimes resisting the political, military, or ecclesiastical forces which were earlier in the lead, sometimes mastering them, sometimes combining with them, economic organization has now taken its place in the world as a fourth great structure, or rather as a fourth great agency through which man achieves his greater tasks, and in so doing becomes conscious of hitherto unrealized powers.

Early in this great process of social organization three divergent types emerged, which still contend for supremacy in the worlds of action and of valuation: dominance, competition, and coöperation. All mean a meeting of human forces. They rest respectively on power, rivalry, and sympathetic interchange. Each may contribute to human welfare. On the other hand, each may be taken so abstractly as to threaten human values. I hope to point out that the greatest of these is coöperation, and that it is largely the touchstone for the others.

Coöperation and dominance both mean organization. Dominance implies inequality, direction and obedience, superior and subordinate. Coöperation implies some sort of equality, some mutual relation. It does not exclude difference in ability or in function. It does not exclude leadership, for leadership is usually necessary to make coöperation effective. But in dominance the special excellence is kept isolated; ideas are transmitted from above downward. In coöperation there is interchange, currents flowing in both directions, contacts of mutual sympathy, rather than of pride-humility, condescension-servility. The purpose of the joint pursuit in organization characterized by dominance may be either the exclusive good of the master or the joint good of the whole organized group, but in any case it is a purpose formed and kept by those few who know. The group may share in its execution and its benefits, but not in its construction or in the estimating and forecasting of its values. The purpose in coöperation is joint. Whether originally suggested by some leader of thought or action, or whether a composite of many suggestions in the give and take of discussion or in experiences of common need, it is weighed and adopted as a common end....