The Essence of Buddhism 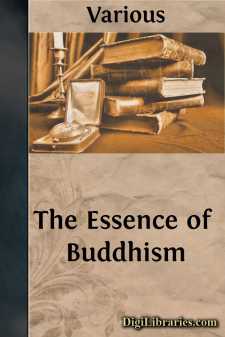 In this compilation no attempt has been made to present a general view of Buddhism as a religious or philosophical system. The aim has rather been to turn Buddhism to account as a moral force by bringing together a selection of its beautiful sentiments, and lofty maxims, and particularly including some of those which inculcate mercy to the lower animals.

On this point a far higher stand is taken by Buddhism than by Christianity—or at any rate than by Christianity as understood and interpreted by those who ought to know. Not only is the whole question of our duties to the lower animals commonly ignored in Christian works as, for instance, in the famous Imitation of Christ, and scores of others; but, as if this were not enough, a reasoned attempt has actually been made, on the strength of Christian teaching, to explode the notion that animals have any right (e.g., in Moral Philosophy, by Father Joseph Rickaby). Very different in this respect is the tone of the average Buddhist treatise, with its earnest exhortations, recurring as a matter of course, to show mercy on every living thing; and this difference alone is an adequate reason for compiling a Buddhist anthology.

In regard to the sources quoted from, considerable latitude seemed allowable. They do not all, by any means, possess canonical authority. But they are all distinctly Buddhist in character. The supposed dates of the originals range from at least the third century B. C. to medieval and later times.

Hence, it is clear that, should any one think to make use of quotations from this work for controversial purposes, a certain degree of caution will be necessary. The context of the passage, and the date and the authorship of the original work, may all need to be taken into account; while it must also be borne in mind that the religious terms, such as "heaven" and "sin," which have to be employed in English, do not always correspond exactly to the Buddhist conception.

Of the numerous Buddhist works which have now been translated from some eight or ten eastern languages, the greater number, when regarded purely as literature, occupy a very low level. At times they are so remarkably dull and silly that the reader is inclined to ask why they were ever translated. But the one redeeming feature in the voluminous compositions of Buddhist writers is the boundless compassion which they consistently inculcate.

The insertion of a passage in these pages does not necessarily imply that the compiler accepts in its entirety the teaching it conveys. Concerning that oft-repeated injunction, not to kill any living creature whatsoever, we can hardly doubt that there are many cases in which to take life, provided it is taken painlessly, not only is not on the whole an unkindness, but is an act of beneficence. If we sometimes give to this injunction the sense of extending our sympathy to the lowest sentient being, and not causing pain to living creatures while they live, we shall perhaps not be doing violence to the spirit of mercy by which it was prompted. There are many passages in Buddhist works which advocate preference for the spirit over the letter, or the exercise of judgment in accepting what we are taught.

A few passages, though not many, have been included more because they are striking or poetical than for the sake of their moral teaching.

As the references given are mostly to the Oriental origins, it is only fair to insert here a list of the English and French translations which have been principally used in compiling this book. The following works comprise most of those which have proved directly of service for the purpose—"Sacred Books of the East," namely: