The Essays of Francis Bacon 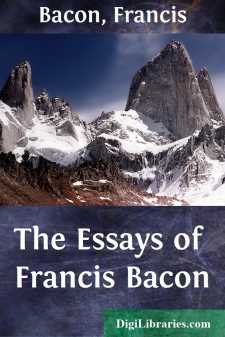 Add to My Favorites
Published: 9 years ago
Downloads: 234
Rating: (0 Votes)

WHAT is truth? said jesting Pilate, and would not stay for an answer. Certainly there be, that delight in giddiness, and count it a bondage to fix a belief; affecting free-will in thinking, as well as in acting. And though the sects of philosophers of that kind be gone, yet there remain certain discoursing wits, which are of the same veins, though there be not so much blood in them, as was in those of the ancients. But it is not only the difficulty and labor, which men take in finding out of truth, nor again, that when it is found, it imposeth upon men's thoughts, that doth bring lies in favor; but a natural, though corrupt love, of the lie itself. One of the later school of the Grecians, examineth the matter, and is at a stand, to think what should be in it, that men should love lies; where neither they make for pleasure, as with poets, nor for advantage, as with the merchant; but for the lie's sake. But I cannot tell; this same truth, is a naked, and open day-light, that doth not show the masks, and mummeries, and triumphs, of the world, half so stately and daintily as candle-lights. Truth may perhaps come to the price of a pearl, that showeth best by day; but it will not rise to the price of a diamond, or carbuncle, that showeth best in varied lights. A mixture of a lie doth ever add pleasure. Doth any man doubt, that if there were taken out of men's minds, vain opinions, flattering hopes, false valuations, imaginations as one would, and the like, but it would leave the minds, of a number of men, poor shrunken things, full of melancholy and indisposition, and unpleasing to themselves?

One of the fathers, in great severity, called poesy vinum daemonum, because it fireth the imagination; and yet, it is but with the shadow of a lie. But it is not the lie that passeth through the mind, but the lie that sinketh in, and settleth in it, that doth the hurt; such as we spake of before. But howsoever these things are thus in men's depraved judgments, and affections, yet truth, which only doth judge itself, teacheth that the inquiry of truth, which is the love-making, or wooing of it, the knowledge of truth, which is the presence of it, and the belief of truth, which is the enjoying of it, is the sovereign good of human nature. The first creature of God, in the works of the days, was the light of the sense; the last, was the light of reason; and his sabbath work ever since, is the illumination of his Spirit. First he breathed light, upon the face of the matter or chaos; then he breathed light, into the face of man; and still he breatheth and inspireth light, into the face of his chosen. The poet, that beautified the sect, that was otherwise inferior to the rest, saith yet excellently well: It is a pleasure, to stand upon the shore, and to see ships tossed upon the sea; a pleasure, to stand in the window of a castle, and to see a battle, and the adventures thereof below: but no pleasure is comparable to the standing upon the vantage ground of truth (a hill not to be commanded, and where the air is always clear and serene), and to see the errors, and wanderings, and mists, and tempests, in the vale below; so always that this prospect be with pity, and not with swelling, or pride....