The Escape of Mr. Trimm His Plight and other Plights 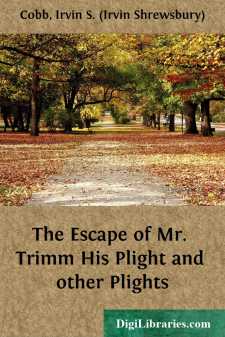 THE ESCAPE OF MR. TRIMM

Mr. Trimm, recently president of the late Thirteenth National Bank, was taking a trip which was different in a number of ways from any he had ever taken. To begin with, he was used to parlor cars and Pullmans and even luxurious private cars when he went anywhere; whereas now he rode with a most mixed company in a dusty, smelly day coach. In the second place, his traveling companion was not such a one as Mr. Trimm would have chosen had the choice been left to him, being a stupid-looking German-American with a drooping, yellow mustache. And in the third place, Mr. Trimm's plump white hands were folded in his lap, held in a close and enforced companionship by a new and shiny pair of Bean's Latest Model Little Giant handcuffs. Mr. Trimm was on his way to the Federal penitentiary to serve twelve years at hard labor for breaking, one way or another, about all the laws that are presumed to govern national banks.

All the time Mr. Trimm was in the Tombs, fighting for a new trial, a certain question had lain in his mind unasked and unanswered. Through the seven months of his stay in the jail that question had been always at the back part of his head, ticking away there like a little watch that never needed winding. A dozen times a day it would pop into his thoughts and then go away, only to come back again.

When Copley was taken to the penitentiary—Copley being the cashier who got off with a lighter sentence because the judge and jury held him to be no more than a blind accomplice in the wrecking of the Thirteenth National—Mr. Trimm read closely every line that the papers carried about Copley's departure. But none of them had seen fit to give the young cashier more than a short and colorless paragraph. For Copley was only a small figure in the big intrigue that had startled the country; Copley didn't have the money to hire big lawyers to carry his appeal to the higher courts for him; Copley's wife was keeping boarders; and as for Copley himself, he had been wearing stripes several months now.

With Mr. Trimm it had been vastly different. From the very beginning he had held the public eye. His bearing in court when the jury came in with their judgment; his cold defiance when the judge, in pronouncing sentence, mercilessly arraigned him and the system of finance for which he stood; the manner of his life in the Tombs; his spectacular fight to beat the verdict, had all been worth columns of newspaper space. If Mr. Trimm had been a popular poisoner, or a society woman named as co-respondent in a sensational divorce suit, the papers could not have been more generous in their space allotments. And Mr. Trimm in his cell had read all of it with smiling contempt, even to the semi-hysterical outpourings of the lady special writers who called him The Iron Man of Wall Street and undertook to analyze his emotions—and missed the mark by a thousand miles or two.

Things had been smoothed as much as possible for him in the Tombs, for money and the power of it will go far toward ironing out even the corrugated routine of that big jail....