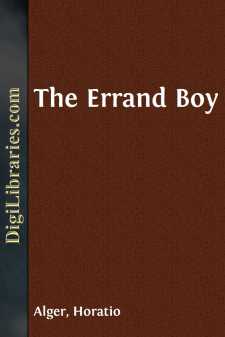 CHAPTER I. PHIL HAS A LITTLE DIFFICULTY.

Phil Brent was plodding through the snow in the direction of the house where he lived with his step-mother and her son, when a snow-ball, moist and hard, struck him just below his ear with stinging emphasis. The pain was considerable, and Phil's anger rose.

He turned suddenly, his eyes flashing fiercely, intent upon discovering who had committed this outrage, for he had no doubt that it was intentional.

He looked in all directions, but saw no one except a mild old gentleman in spectacles, who appeared to have some difficulty in making his way through the obstructed street.

Phil did not need to be told that it was not the old gentleman who had taken such an unwarrantable liberty with him. So he looked farther, but his ears gave him the first clew.

He heard a chuckling laugh, which seemed to proceed from behind the stone wall that ran along the roadside.

"I will see who it is," he decided, and plunging through the snow he surmounted the wall, in time to see a boy of about his own age running away across the fields as fast as the deep snow would allow.

"So it's you, Jonas!" he shouted wrathfully. "I thought it was some sneaking fellow like you."

Jonas Webb, his step-brother, his freckled face showing a degree of dismay, for he had not calculated on discovery, ran the faster, but while fear winged his steps, anger proved the more effectual spur, and Phil overtook him after a brief run, from the effects of which both boys panted.

"What made you throw that snow-ball?" demanded Phil angrily, as he seized Jonas by the collar and shook him.

"You let me alone!" said Jonas, struggling ineffectually in his grasp.

"Answer me! What made you throw that snowball?" demanded Phil, in a tone that showed he did not intend to be trifled with.

"Because I chose to," answered Jonas, his spite getting the better of his prudence. "Did it hurt you?" he continued, his eyes gleaming with malice.

"I should think it might. It was about as hard as a cannon-ball," returned Phil grimly. "Is that all you've got to say about it?"

"I did it in fun," said Jonas, beginning to see that he had need to be prudent.

"Very well! I don't like your idea of fun. Perhaps you won't like mine," said Phil, as he forcibly drew Jonas back till he lay upon the snow, and then kneeling by his side, rubbed his face briskly with snow.

"What are you doin'? Goin' to murder me?" shrieked Jonas, in anger and dismay.

"I am going to wash your face," said Phil, continuing the operation vigorously.

"I say, you quit that! I'll tell my mother," ejaculated Jonas, struggling furiously.

Jonas shrieked and struggled, but in vain. Phil gave his face an effectual scrubbing, and did not desist until he thought he had avenged the bad treatment he had suffered.

Jonas scrambled to his feet, his mean features working convulsively with anger.

"You'll suffer for this!" he shouted.