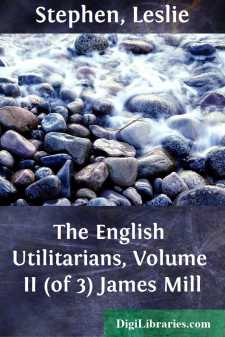 Bentham's mantle fell upon James Mill. Mill expounded in the tersest form the doctrines which in Bentham's hands spread into endless ramifications and lost themselves in minute details. Mill became the leader of Bentham's bodyguard; or, rather, the mediator between the prophet in his 'hermitage' and the missionaries who were actively engaged on the hustings and in committee-rooms. The special characteristics of English Utilitarianism in the period of its greatest activity were thus more affected by Mill than by any other leader of opinion.

James Mill was one of the countless Scots who, having been trained at home in strict frugality and stern Puritanic principles, have fought their way to success in England. He was born 6th April 1773 in the parish of Logie Pert, Forfarshire. His father, also named James Mill, was a village shoemaker, employing two or three journeymen when at the height of his prosperity. His mother, Isabel Fenton, daughter of a farmer, had been a servant in Edinburgh. Her family had some claims to superior gentility; she was fastidious, delicate in frame, and accused of pride by her neighbours. She resolved to bring up James, her eldest son, to be a gentleman, which practically meant to be a minister. He probably showed early promise of intellectual superiority. He received the usual training at the parish school, and was then sent to the Montrose Academy, where he was the school-fellow and friend of a younger lad, Joseph Hume (1777-1855), afterwards his political ally. He boarded with a Montrose shopkeeper for 2s. 6d. a week, and remained at the Academy till he was seventeen. He was never put to work in his father's shop, and devoted himself entirely to study. The usual age for beginning to attend a Scottish university was thirteen or fourteen; and it would have been the normal course for a lad in Mill's position to be sent at that age to Aberdeen. Mill's education was prolonged by a connection which was of great service to him. Sir John Stuart (previously Belches), of Fettercairn House, in Mill's neighbourhood, had married Lady Jane Leslie, and was by her father of an only child, Wilhelmina. Lady Jane was given to charity, and had set up a fund to educate promising lads for the ministry. Mill was probably recommended to her by the parish minister, as likely to do credit to her patronage. He also acted as tutor to Wilhelmina, who afterwards became the object of Scott's early passion. Mill spent much time at Fettercairn House, and appears to have won the warm regards both of the Stuarts and of their daughter, who spoke of him affectionately 'with almost her last breath.' The Stuarts passed their winters at Edinburgh, whither Mill accompanied them. He entered the university in 1790, and seems to have applied himself chiefly to Greek and to philosophy. He became so good a Greek scholar that long afterwards (1818) he had some thoughts of standing for the Greek chair at Glasgow. He was always a keen student of Plato. He read the ordinary Scottish authorities, and attended the lectures of Dugald Stewart....