The English Gipsies and Their Language 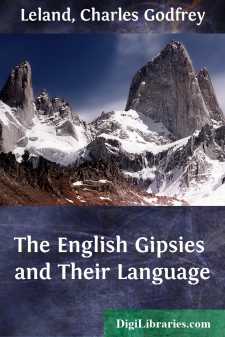 The Rommany of the Roads.—The Secret of Vagabond Life in England.—Its peculiar and thoroughly hidden Nature.—Gipsy Character and the Causes which formed it.—Moral Results of hungry Marauding.—Gipsy ideas of Religion.  The Scripture story of the Seven Whistlers.—The Baker’s Daughter.—Difficulties of acquiring Rommany.—The Fable of the Cat.—The Chinese, the American Indian, and the Wandering Gipsy.

Although the valuable and curious works of Mr George Borrow have been in part for more than twenty years before the British public, it may still be doubted whether many, even of our scholars, are aware of the remarkable, social, and philological facts which are connected with an immense proportion of our out-of-door population.  There are, indeed, very few people who know, that every time we look from the window into a crowded street, the chances are greatly in favour of the assertion, that we shall see at least one man who bears in his memory some hundreds of Sanscrit roots, and that man English born; though it was probably in the open air, and English bred, albeit his breeding was of the roads.

For go where you will, though you may not know it, you encounter at every step, in one form or the other, the Rommany.  True, the dwellers in tents are becoming few and far between, because the “close cultivation” of the present generation, which has enclosed nearly all the waste land in England, has left no spot in many a day’s journey, where “the travellers,” as they call themselves, can light the fire and boil the kettle undisturbed.  There is almost “no tan to hatch,” or place to stay in.  So it has come to pass, that those among them who cannot settle down like unto the Gentiles, have gone across the Great Water to America, which is their true Canaan, where they flourish mightily, the more enterprising making a good thing of it, by prastering graias or “running horses,” or trading in them, while the idler or more moral ones, pick up their living as easily as a mouse in a cheese, on the endless roads and in the forests.  And so many of them have gone there, that I am sure the child is now born, to whom the sight of a real old-fashioned gipsy will be as rare in England as a Sioux or Pawnee warrior in the streets of New York or Philadelphia.  But there is a modified and yet real Rommany-dom, which lives and will live with great vigour, so long as a regularly organised nomadic class exists on our roads—and it is the true nature and inner life of this class which has remained for ages, an impenetrable mystery to the world at large.  A member of it may be a tramp and a beggar, the proprietor of some valuable travelling show, a horse-dealer, or a tinker.  He may be eloquent, as a Cheap Jack, noisy as a Punch, or musical with a fiddle at fairs.  He may “peddle” pottery, make and sell skewers and clothes-pegs, or vend baskets in a caravan; he may keep cock-shys and Aunt Sallys at races.  But whatever he may be, depend upon it, reader, that among those who follow these and similar callings which he represents, are literally many thousands who, unsuspected by the Gorgios, are known to one another, and who still speak among themselves, more or less, that curious old tongue which the researches of the greatest living philologists have indicated, is in all probability not merely allied to Sanscrit, but perhaps in point of age, an elder though vagabond sister or cousin of that ancient language....