The End of a Coil 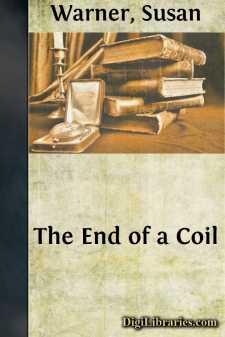 The door stands open of a handsome house in Walnut Street—the Walnut Street which belongs to the city of William Penn; and on the threshold stands a lady, with her hand up to her brows, shielding her eyes from the light. She is watching to see what will come out of a carriage just driving up to the curbstone. The carriage stops; there descends first the figure of a handsome, very comfortable-looking gentleman. Mrs. Eberstein's eyes pass over him very cursorily; she has seen him before; and there is hardly a curl on his handsome head which his wife does not know by heart. What comes next? Ah, that is she!—the figure of the expected one; and a little girl of some eleven years is helped carefully out by Mr. Eberstein, and comes up the steps to the waiting and watching lady. A delicate little thing, delicate in frame and feature alike, with a fair, childish face, framed in by loose light brown curls, and a pair of those clear, grave, wise, light hazel eyes which have the power of looking so young and so spiritually old at once. Those eyes are the first thing that Mrs. Eberstein sees, and they fascinate her already. Meanwhile kind arms are opened wide, and take the little one in.

"Come at last, darling! And do you remember your Aunt Hal? and are you half as glad to see her as she is to see you?" So Mrs. Eberstein gives her greeting, while she is drawing the child through the hall and into the parlour; gives it between kisses.

"Why, no," said her husband, who had followed. "Be reasonable, Harry. She cannot be so glad to see you as we are to see her. She has just come from a long stage-coach journey; and she is tired, and she is hungry; and she has left a world she knows, and has come to a world she doesn't know; hey, Dolly? isn't it true? Tell your Aunt Hal to stop asking questions, and give you something to eat."

"I have come to a world I don't know," repeated the little girl by way of answer, turning her serious small face to her questioner, while Mrs. Eberstein was busily taking off coat and hat and mufflers.

"I wonder who is asking questions now!" said Mrs. Eberstein. "There, darling! now you are at home."

She finished with another kiss; but, nevertheless, I think the feeling that it was a strange world she had come to, was rather prominent in Dolly. She suddenly stooped to a great Maltese cat that was lying on the hearthrug, and I am afraid the eyes were glad of an excuse to get out of sight. She touched the cat's fur tenderly and somewhat diligently.

"She won't hurt you," said her aunt. "That is Mr. Eberstein's pet. Her name is Queen Mab."

"She don't look much like a fairy," was Dolly's comment. Indeed, Queen Mab would outweigh most of her race, and was a magnificent specimen of good feeding.

"You do," thought Mrs. Eberstein. Aloud she asked: "What do you know about fairies?"

"Oh, I know they are only stories. I have read about them."

"No, not much fairy tales," said Dolly, now rising up from the cat....