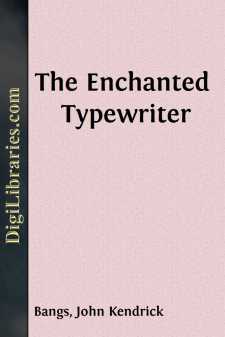 It is a strange fact, for which I do not expect ever satisfactorily to account, and which will receive little credence even among those who know that I am not given to romancing—it is a strange fact, I say, that the substance of the following pages has evolved itself during a period of six months, more or less, between the hours of midnight and four o'clock in the morning, proceeding directly from a type-writing machine standing in the corner of my library, manipulated by unseen hands. The machine is not of recent make. It is, in fact, a relic of the early seventies, which I discovered one morning when, suffering from a slight attack of the grip, I had remained at home and devoted my time to pottering about in the attic, unearthing old books, bringing to the light long-forgotten correspondences, my boyhood collections of "stuff," and other memory-inducing things. Whence the machine came originally I do not recall. My impression is that it belonged to a stenographer once in the employ of my father, who used frequently to come to our house to take down dictations. However this may be, the machine had lain hidden by dust and the flotsam and jetsam of the house for twenty years, when, as I have said, I came upon it unexpectedly. Old man as I am—I shall soon be thirty—the fascination of a machine has lost none of its potency. I am as pleased to-day watching the wheels of my watch "go round" as ever I was, and to "monkey" with a type-writing apparatus has always brought great joy into my heart—though for composing give me the pen. Perhaps I should apologize for the use here of the verb monkey, which savors of what a friend of mine calls the "English slanguage," to differentiate it from what he also calls the "Andrew Language." But I shall not do so, because, to whatever branch of our tongue the word may belong, it is exactly descriptive, and descriptive as no other word can be, of what a boy does with things that click and "go," and is therefore not at all out of place in a tale which I trust will be regarded as a polite one.

The discovery of the machine put an end to my attic potterings. I cared little for finding old bill-files and collections of Atlantic cable-ends when, with a whole morning, a type-writing machine, and a screw-driver before me I could penetrate the mysteries of that useful mechanism. I shall not endeavor to describe the delightful sensations of that hour of screwing and unscrewing; they surpass the powers of my pen. Suffice it to say that I took the whole apparatus apart, cleaned it well, oiled every joint, and then put it together again. I do not suppose a seven-year-old boy could have derived more satisfaction from taking a piano to pieces. It was exhilarating, and I resolved that as a reward for the pleasure it had given me the machine should have a brand-new ribbon and as much ink as it could consume. And that, in brief, is how it came to be that this machine of antiquated pattern was added to the library bric-a-brac. To say the truth, it was of no more practical use than Barye's dancing bear, a plaster cast of which adorns my mantel-shelf, so that when I classify it with the bric-a-brac I do so advisedly....