The Empty House and Other Ghost Stories 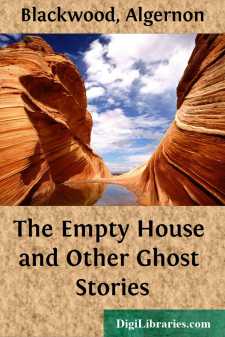 Certain houses, like certain persons, manage somehow to proclaim at once their character for evil. In the case of the latter, no particular feature need betray them; they may boast an open countenance and an ingenuous smile; and yet a little of their company leaves the unalterable conviction that there is something radically amiss with their being: that they are evil. Willy nilly, they seem to communicate an atmosphere of secret and wicked thoughts which makes those in their immediate neighbourhood shrink from them as from a thing diseased.

And, perhaps, with houses the same principle is operative, and it is the aroma of evil deeds committed under a particular roof, long after the actual doers have passed away, that makes the gooseflesh come and the hair rise. Something of the original passion of the evil-doer, and of the horror felt by his victim, enters the heart of the innocent watcher, and he becomes suddenly conscious of tingling nerves, creeping skin, and a chilling of the blood. He is terror-stricken without apparent cause.

There was manifestly nothing in the external appearance of this particular house to bear out the tales of the horror that was said to reign within. It was neither lonely nor unkempt. It stood, crowded into a corner of the square, and looked exactly like the houses on either side of it. It had the same number of windows as its neighbours; the same balcony overlooking the gardens; the same white steps leading up to the heavy black front door; and, in the rear, there was the same narrow strip of green, with neat box borders, running up to the wall that divided it from the backs of the adjoining houses. Apparently, too, the number of chimney pots on the roof was the same; the breadth and angle of the eaves; and even the height of the dirty area railings.

And yet this house in the square, that seemed precisely similar to its fifty ugly neighbours, was as a matter of fact entirely different—horribly different.

Wherein lay this marked, invisible difference is impossible to say. It cannot be ascribed wholly to the imagination, because persons who had spent some time in the house, knowing nothing of the facts, had declared positively that certain rooms were so disagreeable they would rather die than enter them again, and that the atmosphere of the whole house produced in them symptoms of a genuine terror; while the series of innocent tenants who had tried to live in it and been forced to decamp at the shortest possible notice, was indeed little less than a scandal in the town.

When Shorthouse arrived to pay a "week-end" visit to his Aunt Julia in her little house on the sea-front at the other end of the town, he found her charged to the brim with mystery and excitement. He had only received her telegram that morning, and he had come anticipating boredom; but the moment he touched her hand and kissed her apple-skin wrinkled cheek, he caught the first wave of her electrical condition. The impression deepened when he learned that there were to be no other visitors, and that he had been telegraphed for with a very special object....