The Empire of Love 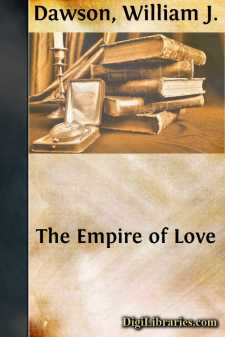 THE GENIUS TO BE LOVED

In the history of the last two thousand years there is but one Person who has been, and is supremely loved. Many have been loved by individuals, by groups of persons, or by communities; some have received the pliant idolatries of nations, such as heroes and national deliverers; but in every instance the sense of love thus excited has been intimately associated with some triumph of intellect, or some resounding achievement in the world of action. In this there is nothing unusual, for man is a natural worshipper of heroes. But in Jesus Christ we discover something very different; He possessed the genius to be loved in so transcendent a degree that it appears His sole genius.

Jesus is loved not for anything that He taught, nor yet wholly for anything that He did, although His actions culminate in the divine fascination of the Cross, but rather for what He was in Himself. His very name provokes in countless millions a reverent tenderness of emotion usually associated only with the most sacred and intimate of human relationships. He is loved with a certain purity and intensity of passion that transcends even the most intimate expressions of human emotion. The curious thing is that He Himself anticipated this kind of love as His eternal heritage with men. He expected that men would love Him more than father or mother, wife or child, and even made such a love a condition of what He called discipleship. The greatest marvel of all human history is that this prognostication has been strictly verified in the event. He is the Supreme Lover, for whose love, unrealizable as it is by touch, or glance, or spoken word, or momentary presence, men and women are still willing to sacrifice themselves, and surrender all things. The pregnant words of Napoleon, uttered in his last lonely reveries in St. Helena, still express the strangest thing in universal history: "Caesar, Charlemagne, I, have founded empires. They were founded on force, and have perished. Jesus Christ has founded an empire on love, and to this day there are millions ready to die for Him."

Napoleon felt the wonder of it all, the baffling, inexplicable marvel. Were we able to detach ourselves enough from use and custom, to survey the movement of human thought from some lonely height above the floods of Time, as Napoleon in the high sea-silences of St. Helena, we also might feel the wonder of this most wonderful thing the world has ever known.

That the majority of men, and even Christian men, do not perceive that the whole meaning of the life of Christ is Love is a thing too obvious to demand evidence or invite contradiction. I say men, and Christian men, thus limiting my statement, because women and Christian women, frequently do perceive it, being themselves the creatures of affection, and finding in affection the one sufficing symbol of life and of the universe. It is a St. Catherine who thinks of herself as the bride of Christ, and dreams the lovely vision of the changed hearts—the heart of Jesus placed by the hands that bled beneath her pure bosom, and her heart hidden in the side of Him who died for her....