by A. R. (Augustus Robert) Buckland 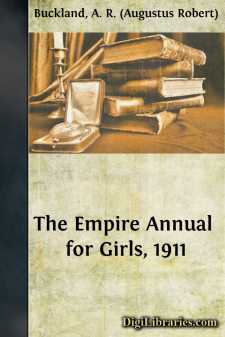 Jack said: "Nonsense! We are all grown up now. Let Christmas alone. Take no notice of it; treat it as if it were an ordinary day."

Margaret said: "The servants have all begged for leave. Most of their mothers are dying, and if they are not, it's a sister who is going to be married. Really, it's a servants' ball which the Squire is giving in the village hall. Mean, I call it, to decoy one's maids just when one needs them most!"

Tom said: "Beastly jolly dull show anyhow, to spend the day alone with your brothers and sisters. Better chuck it at once!"

Peg said firmly and with emphasis: "Heathen! Miserable, cold-blooded, materially-minded frogs! Where's your Christmas spirit, I should like to know? . . . If you have none for yourselves, think of other people. Think of me! I love my Christmas, and I'm not going to give it up for you or any one else. My very first Christmas at home as a growed-up lady, and you want to diddle me out of it. . . . Go to! Likewise, avaunt! Now by my halidom, good sirs, you know not with whom you have to deal. 'Tis my royal pleasure the revels proceed!"

Jack grimaced eloquently at Margaret, who grimaced back.

"With all the pleasure in the world," he said suavely. "Show me a revel, and I'll revel with the best. I like revels. What I do not like is to stodge at home eating an indigestible meal, and pretending that I'm full of glee, when in reality I'm bored to death. If you could suggest a change. . . ."

Margaret sighed; Tom sniffed; Peg pursed up her lips and thought. Presently her eyes brightened. "Of course," she remarked tentatively, "there are the Revells!"

Jack flushed and bit his lips.

"Quite so! There are. Fifty miles away, and not a spare bed in the house. Lot of good they are to us, to be sure! Were you going to suggest that we dropped in for a quiet call? Silly nonsense, to talk of a thing like that."

Jack was quite testy and huffed, for the suggestion touched a tender point. The Revells were the friends par excellence of the family of which he was the youthful head. It seemed, indeed, as if the two households had been specially manufactured so that each should fit the wants of the other. Jack was very certain that, in any case, Myra Revell supplied all that he lacked, and the very thought of spending Christmas Day in her company sent a pang of longing through his heart. Margaret cherished a romantic admiration for Mrs. Revell, who was still a girl at heart despite the presence of a grown-up family. Dennis was at Marlborough with Tom; while Pat or Patricia was Peg's bosom chum.

What could you wish for more? A Christmas spent with the Revells would be a pure delight; but alas! fifty miles of some of the wildest and bleakest country in England stretched between the two homes, which, being on different lines of railway, were inaccessible by the ordinary route. Moreover, the Revells were, as they themselves cheerfully declared, "reduced paupers," and inhabited a picturesquely dilapidated old farmhouse, and the problem, "Where do they all sleep?" was as engrossing as a jig-saw puzzle to their inquisitive friends....