The Emigrant or Reflections While Descending the Ohio 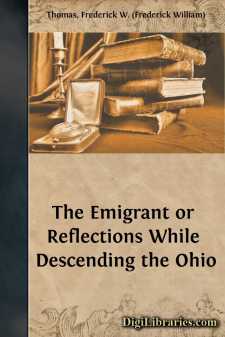 Frederick William Thomas was the oldest child of E. S. Thomas and Anna his wife. He was born at Providence Rhode Island, but spent his earlier years at Charleston South Carolina, where Mr. E. S. Thomas resided and edited and published the Charleston City Gazette.

While Frederick William was still young, Mr. Thomas removed to Baltimore Maryland, and there his son was educated and brought up to the profession of the law. Being unfortunate in business, when Frederick William was about nineteen, Mr. Thomas resolved to remove with his family to the west, which he did, making Cincinnati his place of residence. His son however, remained in Baltimore.

It was in the following year while journeying West, to join his family in their new home, that this poem––the Emigrant was suggested to him, by the associations and the romantic scenery of the Ohio river, and while descending it most, if not all the poem, was written. He was about twenty-one when it appeared. It was followed by “Clinton Bradshaw,” or the adventures of a Lawyer, published by Carey, Lee and Blanchard, of Philadelphia. This was called the best American Novel of its time. Mr. Thomas’ next venture was “East and West” which was succeeded by “Howard Pinkney.” During the years which intervened between the writing of these books he resided in the west, principally in Cincinnati, and wrote tales, sketches, fugitive poetry, delivered lectures, and made political speeches. In 1840 when General Harrison was elected President, Mr. Thomas went to Washington City. After General Harrison’s death, Mr. Tyler gave him an office under government and he continued to reside at the Capital, but wrote little except an occasional song or story. Some years elapsed and Mr. Thomas left Washington and went south on a lecturing tour. He was engaged to write for several newspapers and continued lecturing through the South and West. His literary efforts at this period were chiefly confined to Magazine articles, short poems and songs. His song “T’is said that Absence conquers Love,” was one of the most popular of the day. He often spoke of the feeling he had in passing of a summers night through a strange city and having his own words greet him from houses whose inmates only knew of his existence through them.

Clinton Bradshaw was also very popular. An American visiting Calcutta India, wrote home of the thrill it gave him to find it on the shelves of a book store there.

Mr. Thomas was popular in society for he was amiable and entertaining. He was a fine belle letter scholar, and was remarkable for his conversationable powers––he had a fund of anecdote always at command. He was a great observer and studier of Character and a believer in human nature.

The year 1866 found him again in Washington city where after a short illness he died. Recently his remains have been brought to Cincinnati, by his brother Calvin W. Thomas and placed beside those of his parents in Spring Grove Cemetery.