The Emancipation of Massachusetts 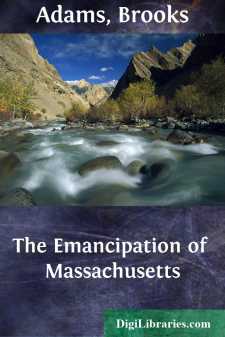 I wrote this little volume more than thirty years ago, since when I have hardly opened it. Therefore I now read it almost as if it were written by another man, and I find to my relief that, on the whole, I think rather better of it than I did when I published it. Indeed, as a criticism of what were then the accepted views of Massachusetts history, as expounded by her most authoritative historians, I see nothing in it to retract or even to modify. I do, however, somewhat regret the rather acrimonious tone which I occasionally adopted when speaking of the more conservative section of the clergy. Not that I think that the Mathers, for example, and their like, did not deserve all, or, indeed, more than all I ever said or thought of them, but because I conceive that equally effective strictures might have been conveyed in urbaner language; and, as I age, I shrink from anything akin to invective, even in what amounts to controversy.

Therefore I have now nothing to alter in the Emancipation of Massachusetts, viewed as history, though I might soften its asperities somewhat, here and there; but when I come to consider it as philosophy, I am startled to observe the gap which separates the present epoch from my early middle life.

The last generation was strongly Darwinian in the sense that it accepted, almost as a tenet of religious faith, the theory that human civilization is a progressive evolution, moving on the whole steadily toward perfection, from a lower to a higher intellectual plane, and, as a necessary part of its progress, developing a higher degree of mental vigor. I need hardly observe that all belief in democracy as a final solution of social ills, all confidence in education as a means to attaining to universal justice, and all hope of approximating to the rule of moral right in the administration of law, was held to hinge on this great fundamental dogma, which, it followed, it was almost impious to deny, or even to doubt. Thus, on the first page of my book, I observe, as if it were axiomatic, that, at a given moment, toward the opening of the sixteenth century, "Europe burst from her mediæval torpor into the splendor of the Renaissance," and further on I assume, as an equally self- evident axiom, that freedom of thought was the one great permanent advance which western civilization made by all the agony and bloodshed of the Reformation. Apart altogether from the fact that I should doubt whether, in the year 1919, any intelligent and educated man would be inclined to maintain that the twelfth and thirteenth centuries were, as contrasted with the nineteenth, ages of intellectual torpor, what startles me in these paragraphs is the self-satisfied assumption of the finality of my conclusions. I posit, as a fact not to be controverted, that our universe is an expression of an universal law, which the nineteenth century had discovered and could formulate.

During the past thirty years I have given this subject my best attention, and now I am so far from assenting to this proposition that my mind tends in the opposite direction....