The Elene of Cynewulf translated into English prose 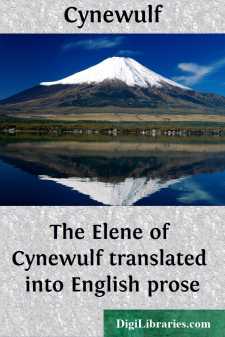 There had passed in the turn of years, as men mark the tale of time, two hundred and thirty and three winters over the world since the Lord God, the Glory of kings and Light of the faithful, was born on earth in human guise; and it was the sixth 5 year of the reign of Constantine since he was raised in the realm of the Romans to lead their army, a prince of battles. He was a bulwark to his people, 10 valiant with the shield, and gracious to his heroes; and the prince's realm waxed great beneath the heavens. He was a just king, a war-lord of men. God strengthened him with majesty and might till 15 he became a joy to many men throughout the world, an avenger for his people when he raised aloft his spear against their foes.

2. THE WAR WITH THE BARBARIANS.

And battle was brought on him, the tumult of strife. The people of the Huns and famous Goths 20 gathered a host together; and the Franks and Hugas marched forth, men fierce in fight and ripe for war. The spears and woven mail-coats glittered, as with shouts and clash of shields they lifted up on high the standard of battle. Openly 25 the fighters gathered all together, and the throng marched forth. The wolf in the wood howled his war-song, and hid not his secret hopes of carnage; and at the rear of the foe the dewy-feathered eagle 30 shrieked his note on high.

A mighty host hastened to war through the cities, gleaned from all the men the Hunnish king could summon from the near-lying towns. A vast army sallied forth—bands of picked horsemen strengthened 35 the force of the foot-soldiers—until within a foreign land upon the bank of the Danube these stout-souled brandishers of the spear pitched their camp near the water's flow, amid the tumult of the army. They longed to overrun the realm of the 40 Romans, and lay it waste with their hordes.

Then were the dwellers in the cities aware of the Huns' coming. And the emperor straightway bade summon with the greatest speed by dispatch of the arrow his heroes to war against the foes; bade lead out to battle the warriors beneath the heavens. 45 Their hearts inspired by victory, the Roman heroes were soon girt with weapons for the fight, though they had a lesser host for battle than circled about the proud king of the Huns. Then the shields 50 rang, the wood of war clashed; the king with the host, his army, marched forth to strife, and over their heads the raven wailed, dark, and thirsting for the slaughter. The army was moving—trumpeters leaped, heralds shouted commands, and horses stamped the earth. Hastily the multitude enranked 55 itself for strife.

But the king was fear-smitten, awed with terror, as he looked upon the hostile host, the army of the Huns and Goths, that upon the river's bank at the boundary of the Roman realm was massing its 60 strength, an uncounted multitude. The king of the Romans suffered bitter grief of soul, and hoped not for his kingdom because of his small host; he had too few warriors, trusty thanes, to encounter the overmight of brave men in battle....