The Electoral Votes of 1876 Who Should Count Them, What Should Be Counted, and the Remedy for a Wrong Count 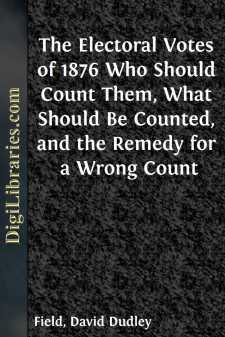 Who should Count them,What should be Counted, andThe Remedy for a Wrong Count.

The electoral votes of 1876 have been cast. The certificates are now in Washington, or on their way thither, to be kept by the President of the Senate until their seals are broken in February. The certificates and the votes of thirty-four of the States are undisputed. The remaining four are debatable, and questions respecting them have arisen, upon the decision of which depends the election of the incoming President. These questions are: Who are to count the votes; what votes are to be counted; and what is the remedy for a wrong count? I hope not to be charged with presumption if, in fulfilling my duty as a citizen, I do what I can toward the answering of these questions aright; and, though I happen to contribute nothing toward satisfactory answers, I shall be excused for making the effort.

The questions themselves have no relation to the relative merits of the two candidates. Like other voters, I expressed my own preference on the morning of the election. That duty is discharged; another duty supervenes, which is, to take care that my vote is counted and allowed its due place in the summary of the votes. Otherwise the voting performance becomes ridiculous, and the voter deserves to be laughed at for his pains. His duty—to cast his vote according to his conscience—was clear; it is no less his duty to make the vote felt, along with other like votes, according to the laws.

The whole duty of a citizen is not ended when his vote is delivered; there remains the obligation to watch it until it is duly weighed, in adjusting the preponderance of the general choice. Whatever may be the ultimate result of the count, whether his candidate will have lost or won, is of no importance compared with the maintenance of justice and the supremacy of law over the preferences and passions of men.

It concerns the honor of the nation that fraud shall not prevail or have a chance of prevailing. If a fraudulent count is possible, it is of little consequence how my vote or the votes of others be cast; for the supreme will is not that of the honest voter, but of the dishonest counter; and, when fraud succeeds, or is commonly thought to have succeeded, the public conscience, shocked at first, becomes weakened by acquiescence; and vice, found to be profitable, soon comes to be triumphant. It is of immeasurable importance, therefore, that we should not only compose the differences that, unfortunately, have arisen, but compose them upon a basis right in itself and appearing to be right also.

Who should count the Votes?

This is the first question. What is meant by counting? In one sense, it is only enumeration, an arithmetical operation, which in the present instance consists of addition and subtraction. In another sense it involves segregation, separation of the false from the true. If a hundred coins are thrown upon a banker's counter, and his clerk is told to count the good ones, he has both to select and to enumerate. He takes such as he finds sufficient in metal and weight, and rejects the light and counterfeit....