The Eighteenth Century in English Caricature 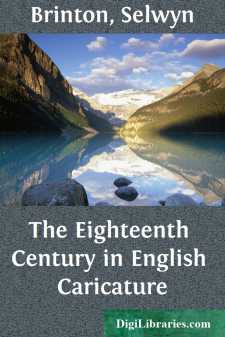 The word Caricature does not lend itself easily to precise definition. Etymologically it connects itself with the Italian caricare, to load or charge, thus corresponding precisely in derivation with its French equivalent Charge; and—save a yet earlier reference in Sir Thomas Browne—it first appears, as far as I am aware, in that phrase of No. 537 of the Spectator, "Those burlesque pictures which the Italians call caracaturas."

Putting the dry bones of etymology from our thought the essence, the life-blood of the thing itself, is surely this—the human creature's amusement with itself and its environment, and its expression of that amusement through the medium of the plastic arts. So that our caracatura, our burlesque picture of life, stands on the same basis as comedy or satire, is, in fact, but comedy or satire finding its outlet in another form of expression. And this is so true that wherever we find brilliant or trenchant satire of life there we may be sure, too, that caricature is not far absent. Pauson's grotesques are the correlative of the Comedies of Aristophanes; and when the development of both is not correlative, not simultaneous, it is surely because one or other has been checked by political or social conditions, which have been inherently antagonistic to its growth.

Those conditions—favourable or antagonistic—it becomes part of our inquiry at this point to examine. We have this to ask, even granting that our "burlesque picture" is a natural, almost a necessary, accompaniment of human life,—was found, we may quite safely assume, in the cave-dwelling of primitive man, who probably satirised with a flint upon its walls those troublesome neighbours of his, the mammoth and the megatherium,—peers out upon us from the complex culture of the Roman world in the clumsy graffito of the Crucifixion,—emerges in the Middle Ages in a turbulent growth of grotesque, wherein those grim figures of Death or Devil move through a maze of imagery often quaint and fantastic, sometimes obscene or terrible—takes a fresh start in the Passionals of Lucas Cranach, and can be traced in England through her Rebellion and Restoration up to the very confines of the eighteenth century. Why, we have to ask, even granting that William Hogarth's "monster Caricatura" is thus omnivorous and omnipresent, does he tower aloft in some countries and under some conditions to the majesty of a new art, and in others dwindle down to puny ridicule?

Taking the special subject of this little volume, the eighteenth century itself, we find little to interest us in French pictorial satire until that monstrous growth of political caricature created by the Revolution. Italy in the same period has but little to offer us, Germany as little or less; and it is to England that we must turn for the pictorial humour, whether social or political, of that interesting epoch. And this because the England of that time is a self-conscious creature, emergent from a successful struggle for freedom, and strong enough to enjoy a hearty laugh—even at her own expense....