The Edda, Volume 2 The Heroic Mythology of the North, Popular Studies in Mythology, Romance, and Folklore, No. 13 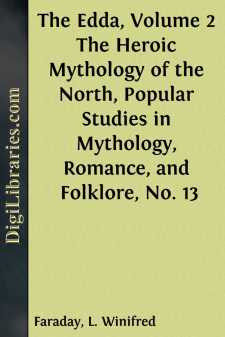 The Heroic Mythology of the North

Sigemund the Waelsing and Fitela, Aetla, Eormanric the Goth and Gifica of Burgundy, Ongendtheow and Theodric, Heorrenda and the Heodenings, and Weland the Smith: all these heroes of Germanic legend were known to the writers of our earliest English literature. But in most cases the only evidence of this knowledge is a word, a name, here and there, with no hint of the story attached. For circumstances directed the poetical gifts of the Saxons in England towards legends of the saints and Biblical paraphrase, away from the native heroes of the race; while later events completed the exclusion of Germanic legend from our literature, by substituting French and Celtic romance. Nevertheless, these few brief references in Beowulf and in the small group of heathen English relics give us the right to a peculiar interest in the hero-poems of the Edda. Page 4In studying these heroic poems, therefore, we are confronted by problems entirely different in character from those which have to be considered in connexion with the mythical texts. Those are in the main the product of one, the Northern, branch of the Germanic race, as we have seen (No. 12 of this series), and the chief question to be determined is whether they represent, however altered in form, a mythology common to all the Germans, and as such necessarily early; or whether they are in substance, as well as in form, a specific creation of the Scandinavians, and therefore late and secondary. The heroic poems of the Edda, on the contrary, with the exception of the Helgi cycle, have very close analogues in the literatures of the other great branches of the Germanic race, and these we are able to compare with the Northern versions.

The Edda contains poems belonging to the following heroic cycles:

(a) Weland the Smith.—Anglo-Saxon literature has several references to this cycle, which must have been a very popular one; and there is also a late Continental German version preserved in an Icelandic translation. But the poem in the Edda is the oldest connected form of the story.

(b) Sigurd and the Nibelungs.—Again the oldest reference is in Anglo-Saxon. There Page 5are two well-known Continental German versions in the Nibelungen Lied and the late Icelandic Thidreks Saga, but the Edda, on the whole, has preserved an earlier form of the legend. With it is loosely connected

(c) The Ermanric Cycle.—The oldest references to this are in Latin and Anglo-Saxon. The Continental German version in the Thidreks Saga is late, and, like that in the Edda, contaminated with the Sigurd story, with which it had originally nothing to do.

(d) Helgi.—This cycle, at least in its present form, is peculiar to the Scandinavian North.

All the above-named poems are contained in Codex Regius of the Elder Edda. From other sources we may add other poems which are Eddic, not Skaldic, in style, in which other heroic cycles are represented. The great majority of the poems deal with the favourite story of the Volsungs, which threatens to swamp all the rest; for one hero after another, Burgundian, Hun, Goth, was absorbed into it....