The Edda, Volume 1 The Divine Mythology of the North, Popular Studies in Mythology, Romance, and Folklore, No. 12 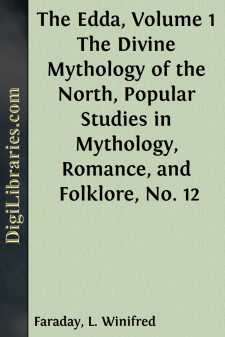 The Divine Mythology of the North

The Icelandic Eddas are the only vernacular record of Germanic heathendom as it developed during the four centuries which in England saw the destruction of nearly all traces of the heathen system. The so-called Elder Edda is a collection of some thirty poems, mythic and heroic in substance, interspersed with short pieces of prose, which survives in a thirteenth-century MS., known as the Codex Regius, discovered in Iceland in 1642; to these are added other poems of similar character from other sources. The Younger Edda is a prose paraphrase of, and commentary on, these poems and others which are lost, together with a treatise on metre, written by the historian Snorri Sturluson about 1220.

This use of the word Edda is incorrect and unhistorical, though convenient and sanctioned by the use of several centuries. It was early used as a general term for the rules and materials for versemaking, and applied in this sense to Snorri's Page 2work. When the poems on which his paraphrase is founded were discovered, Icelandic scholars by a misunderstanding applied the name to them also; and as they attributed the collection quite arbitrarily to the historian Saemund (1056–1133), it was long known as Saemundar Edda, a name now generally discarded in favour of the less misleading titles of Elder or Poetic Edda. From its application to this collection, the word derives a more extended use, (1) as a general term for Norse mythology; (2) as a convenient name to distinguish the simpler style of these anonymous narrative poems from the elaborate formality of the Skalds.

The poems of the Edda are certainly older than the MS., although the old opinion as to their high antiquity is untenable. The majority probably date from the tenth century in their present form; this dating does not necessitate the ascription of the shape in which the legends are presented, still less of their substance, to that period. With regard to the place of their composition opinions vary widely, Norway, the British Isles and Greenland having all found champions; but the evidence is rather questionable, and I incline to leave them to the country which has preserved them. They are possibly of popular origin; this, together with their epic or narrative character, would account for the striking absence from them of some of the chief characteristics of Skaldic poetry: the obscuring of Page 3the sense by the elaborate interlacing of sentences and the extensive use of kennings or mythological synonyms, and the complication of the metre by such expedients as the conjunction of end-rhyme with alliteration. Eddie verse is governed solely by the latter, and the strophic arrangement is simple, only two forms occurring: (1) couplets of alliterative short lines; (2) six-line strophes, consisting of a couplet followed by a single short line, the whole repeated.

Roughly speaking, the first two-fifths of the MS. is mythological, the rest heroic. I propose to observe this distinction, and to deal in this study with the stories of the Gods....