The Easiest Way A Story of Metropolitan Life 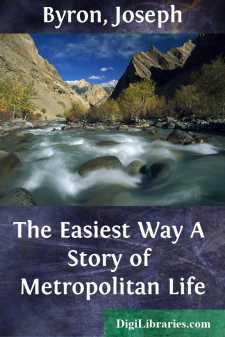 The hour was late and the theatres were emptying. The crowds, coming from every direction at once, were soon a confused, bewildered mass of elbowing humanity. In the proximity of Broadway and Forty-second Street, a mob of smartly-dressed people pushed unceremoniously this way and that. They swept the sidewalks like a resistless torrent, recklessly attempting to force a path across the carriage blocked road, darting in and out under restive horses' heads, barely rescued by stalwart traffic policemen from the murderous wheels of onrushing automobiles. They scrambled into taxicabs, trains and trolleys, all impelled by a furious, yet not unreasonable, desire to reach home with the least possible delay. These were the wise ones. Others lingered, struggling feebly in the whirling vortex. Not yet surfeited with the evening's amusement, they now craved recherché gastronomical joys. With appetites keen for the succulent, if always indigestible, dainties of after-theatre suppers, they sought the hospitable portals of Gotham's splendidly appointed lobster palaces which, scattered in amazing profusion along the Great White Way, their pretentious facades flamboyantly ablaze with light, seemed so many oases of luxurious comfort set down in the nocturnal desert of closed shops.

"Move on there!" thundered an irate policeman. "What the h—ll are you blocking the way for? I've half a mind to lock you fellows up!"

This to two grasping jehus, who, while quarrelling over a prospective fare, had so well succeeded in interlocking their respective wheels that a quarter-of-a-mile-long block resulted instantly. The officer, exasperated beyond endurance, was apoplectic in the face from the too sudden strain upon his temper. Starting angrily forward he seemed as if about to carry out his threat, and the effect of this was magic. The offending cabbies quickly disentangled themselves, and once more the long string of vehicles began to move. Women screamed shrilly, as with their escorts they dodged the horses' hoofs, the trolleys clanged their gongs, electric-signs blinked their pictorial designs, noisy boys yelled hoarsely "final extras!" The din was nerve racking. One had to shout to be heard, yet no one seemed to object. Everybody was happy. New York was merely enjoying itself.

The rush was at its height, when two young men, perhaps weary of being buffeted by the throngs that still pushed up Broadway, turned sharply to the right and entered a fashionable all-night café. Halting for a moment in the richly-carpeted and mirrored vestibule to divest themselves of their outer garments, they pocketed the brass checks handed out by a dapper page and passing on into the restaurant, quietly took seats in an out-of-the-way corner.

The place was already well filled. Nearly all of the small, round tables, crowded too close for comfort, were taken, and the loud chatter of men and women, the handling of dishes, the going and coming of waiters, the more or less labored efforts of a tzigane orchestra—all this made a hubbub as loud as that in the busy street without....