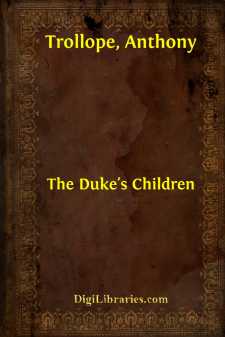 CHAPTER I When the Duchess Was Dead

No one, probably, ever felt himself to be more alone in the world than our old friend, the Duke of Omnium, when the Duchess died. When this sad event happened he had ceased to be Prime Minister. During the first nine months after he had left office he and the Duchess remained in England. Then they had gone abroad, taking with them their three children. The eldest, Lord Silverbridge, had been at Oxford, but had had his career there cut short by some more than ordinary youthful folly, which had induced his father to agree with the college authorities that his name had better be taken off the college books,—all which had been cause of very great sorrow to the Duke. The other boy was to go to Cambridge; but his father had thought it well to give him a twelvemonth's run on the Continent, under his own inspection. Lady Mary, the only daughter, was the youngest of the family, and she also had been with them on the Continent. They remained the full year abroad, travelling with a large accompaniment of tutors, lady's-maids, couriers, and sometimes friends. I do not know that the Duchess or the Duke had enjoyed it much; but the young people had seen something of foreign courts and much of foreign scenery, and had perhaps perfected their French. The Duke had gone to work at his travels with a full determination to create for himself occupation out of a new kind of life. He had studied Dante, and had striven to arouse himself to ecstatic joy amidst the loveliness of the Italian lakes. But through it all he had been aware that he had failed. The Duchess had made no such resolution,—had hardly, perhaps, made any attempt; but, in truth, they had both sighed to be back among the war-trumpets. They had both suffered much among the trumpets, and yet they longed to return. He told himself from day to day, that though he had been banished from the House of Commons, still, as a peer, he had a seat in Parliament, and that, though he was no longer a minister, still he might be useful as a legislator. She, in her career as a leader of fashion, had no doubt met with some trouble,—with some trouble but with no disgrace; and as she had been carried about among the lakes and mountains, among the pictures and statues, among the counts and countesses, she had often felt that there was no happiness except in that dominion which circumstances had enabled her to achieve once, and might enable her to achieve again—in the realms of London society.

Then, in the early spring of 187—, they came back to England, having persistently carried out their project, at any rate in regard to time. Lord Gerald, the younger son, was at once sent up to Trinity. For the eldest son a seat was to be found in the House of Commons, and the fact that a dissolution of Parliament was expected served to prevent any prolonged sojourn abroad. Lady Mary Palliser was at that time nineteen, and her entrance into the world was to be her mother's great care and great delight....