The Drone A Play in Three Acts 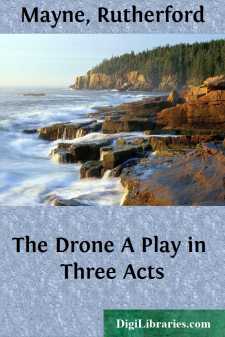 The Drone A COMEDY IN THREE ACTS ACT I.

Scene: The farm kitchen of John Murray. It is large and spacious, with a wide open fire-place to the right. At the back is one door leading to the parlour and other rooms in the house, also a large window overlooking the yard outside. To the left of this window is the door leading into the yard, and near the door an old-fashioned grandfather's clock. Opposite to the fire-place on the left side is another door leading into Daniel Murray's workshop, and beside this door is a large dresser with crockery, &c. At the back beneath the window is a table near which Kate, the servant, a slatternly dressed girl of some thirty years of age or more, is seated. She is carefully examining some cakes of soda bread, and has a bucket beside her into which she throws the rejected pieces.

(Brown, the servant man, opens the door from yard and enters. He is elderly, and with a pessimistic expression of face, relieved somewhat by the sly humour that is in his eyes. He walks slowly to the centre of the kitchen, looks at Kate, and then turns his eyes, with a disgusted shake of the head, towards the dresser as if searching for something.)

Brown. Well! Well! Pigs get fat and men get lean in this house.

Kate. It's you again, is it? And what are you looking now?

Brown. I'm looking a spanner for the boss. The feedboard to the threshing machine got jammed just when halfway through the first stack, and he is in a lamentable temper.

Kate (uneasily). Is he? (She starts hurriedly to clear up the table.)

Brown (watching her slyly to see what effect his words have). And he's been grumbling all morning about the way things is going on in this house. Bread and things wasted and destroyed altogether.

Kate. Well, it's all Miss Mary's fault. I told her about this bread yesterday forenoon, and she never took any heed to me.

Brown. Miss Mary? (With a deprecatory shake of his head.) What does a slip of a girl like that know about housekeeping and her not home a half-year yet from the boarding-school in the big town, and with no mother nor nobody to train her. (He stares in a puzzled way at the dresser.) I don't see that spanner at all. Did you see it, Kate?

Kate. No. I've more to do than look for spanners.

Brown (gazing reproachfully at her and then shaking his head). It's a nice house, right enough. (Lowering his voice.) And I suppose old Mr. Dan is never up yet. I was told by Johnny McAndless, he was terribly full last night at McArn's publichouse and talking—ach—the greatest blethers about this new invention of his.

Kate. Do you say so?

Brown. Aye. No wonder he's taking a lie this morning. (He peeps into the door of the workshop.) He's not in his wee workshop?

Kate. No. Miss Mary is just after taking up his breakfast to him.

Brown. Some people get living easy in this world....